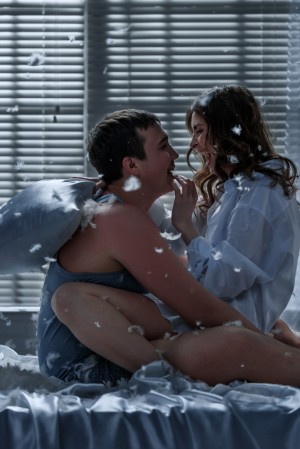 Humor is an aphrodisiac — or at least women (and men) consistently tell surveys that “a sense of humor” is a top attraction in a romantic partner, even more important than looks, brains or wealth. So in crafting my next novel’s sexy hero, I should forget face and fortune and focus on funny? Really? I just don’t buy it, even though I’ve heard countless girlfriends declare the importance of a “sense of humor” in choosing “the one.” Let’s get something clear: Men and women mean something very different when they say they value a sense of humor in a potential mate. Women mean they want men who can amuse, while men mean they want women who think they are amusing. Women want a humor generator, and men want a humor appreciator, as one psychologist explained. Natural selection has put humor at the top of the sexual scale for women as an indicator of male “cognitive fitness,” opines another scientist, so men naturally use humor to compete for female attention. OK, so laughter and desire are linked. But which comes first? Is a gal enticed because he makes her giggle, or does she giggle because she’s already interested in him? It’s the latter, asserts comedian Gilbert Gottfried’s Playboy magazine article entitled “Women Say They Want a Guy With a Sense of Humor. They Don’t.” Concludes Gottfried: “If a woman is laughing at everything you say, she already plans to f– you. That’s all there is to it. Your jokes don’t have to be any good, because she’s not really listening. If she’s planning to f– you, she’ll laugh. And if she’s not, she won’t. End of story.” Humor is probably more important in sustaining rather than sparking romance anyway. Marriage researchers have found that when humor plays a role in diffusing tension and conflict, marriages tend to last longer, and that people who joke with their spouses tend to be happier in their marriages. For a more scientific and less profane discussion than Gottfried’s, read the Psychology Today article at http://www.psychologytoday.com/articles/200508/humors-sexual-side