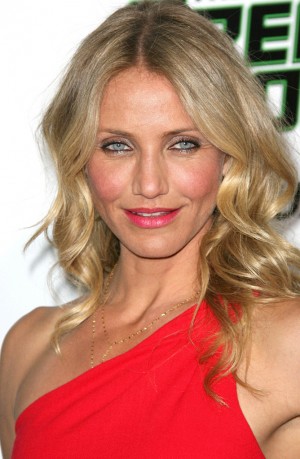 Cameron Diaz, who is currently starring in The Other Woman, was born August 30, 1972, in San Diego, California and grew up as an adventurous and tough kid.  Diaz began modeling when she was 16 years old. As a successful model  she traveled all  over the world working in Japan, Australia, Morocco, Paris and other international cities. She landed on covers and the pages of Mademoiselle and Seventeen, and was featured  in advertising campaigns for such companies as Calvin Klein, Coca-Cola, and Levi’s. At 21, she was working as a model in Los Angeles when, on a whim, her agent submitted her to the auditions for a new Jim Carrey movie entitled, The Mask.

With no previous acting experience, she had originally auditioned for a supporting character in the film. Twelve callbacks later, however, she was hired to play torch-singing mob moll Tina Carlyle, the female lead. After the success of The Mask, Diaz was touted as the next big thing in Hollywood and wooed by a number of prominent filmmakers to appear in their projects.

She opted to hone her craft by appearing in several small budget independent films first, before doing her next studio picture, My Best Friend’s Wedding. Diaz made the leap to A-list Hollywood stardom with her savvy comic turn in the unapologetically crude surprise summer blockbuster There’s Something About Mary, costarring Ben Stiller.

With her name near the top on virtually every list of Hollywood’s sexiest actresses, she is firmly established as one of filmdom’s hottest properties and most sought after actresses. Other notable film roles include: Vanilla Sky, Any Given Sunday, Charlie’s Angels, Being John Malkovich and Shrek. Her current film, The Other Woman is now in theaters (to see trailer and more about the movie, click here).

Diaz adds author to her list of accomplishments with the publication of The Body Book, which offers health and wellness advice and inspiration for young women, addressing fitness, nutrition and well-being.

Diaz supports 21 different charities in all, ranging from AIDS Project Los Angeles to Act Green. She participated in  Live Earth in New York on July 7, 2007, by introducing Bon Jovi and The Police.

She is also a member of the Pangea Day advisory board, an organization dedicated to creating a worldwide network of concerned citizens who are making a difference and belief that film can change the world.

Diaz created her own foundation, Begin Today for Tomorrow, in 2001. The foundation has donated to organizations such as the Children’s Dental Health Clinic,  African Wildlife Foundation, Childrens Defense Fund, Pathways to Independence, and Roar Foundation.