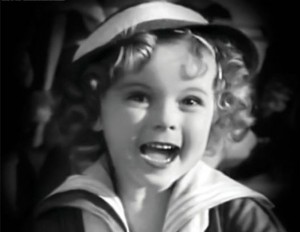 It’s the time of year when children dominate in public media and private ceremonies, symbols of hope and innocence to be showered with gifts. We forget how recently children became “economically worthless but emotionally priceless,” as sociologist Viviana Zelizer has said.  Even in early 20th century America, children were economic assets who worked in fields and factories; they were soldiers and sexual partners; they were traded in marriage by families seeking financial and social gain; and they were regularly parents themselves in their teens.

In many places in the world, children still perform roles today’s Americans believe should be reserved for adults–and they are still political pawns in deadly adult conflicts, as the recent headlines about the Pakistani Taliban’s school massacre prove. So it seems especially apropos now to remember one of our earliest and most popular icons of the child as innocent source of joy: child star Shirley Temple, who died just this year at age 85. Some of the curly-topped moppet’s 1930s-era Christmas-themed movies used to be seasonal TV fare, including Heidi, I’ll Be Seeing You, Bright Eyes (with the signature song “On the Good Ship Lollipop”), and Stowaway with its final Christmas scene. Now little Shirley is the subject of a new book, The Little Girl Who Fought the Great Depression by John F. Kasson. Yes, this is one little girl who was economically priceless (to the movie studios), emotionally priceless to a nation seeking optimism in hard times, and politically priceless to leaders like President Franklin D. Roosevelt, who publicly enlisted Shirley in his “politics of cheer” to back economic revival programs. Kasson also credits Shirley’s impact with a new view of the child as coddled consumer, of children cared for through the purchase of things. To borrow from her hit debut song, “Baby, Take a Bow” for the seasonal shopping frenzy, Shirley.  To see a review of Kasson’s book, go to http://bostonreview.net/books-ideas/judith-levine-john-kasson-shirley-temple