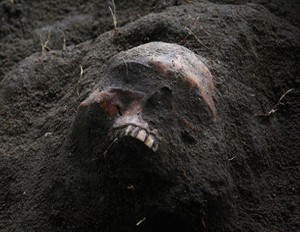 A male skeleton from the 13th century with a plowshare driven through its rib cage has been excavated in the eastern European region in which the first reports of vampires originated nearly a millennium ago.

“We have no doubts that once again we’re seeing an anti-vampire ritual being carried out,” Nikolay Ovcharov, a celebrity archaeologist, told the Daily Telegraph. He accidentally struck upon the burial site while excavating the remains of the much older Thracian city of Perperikon, not far from Bulgaria’s border with Greece.

Ovcharov said the 2lb (1kg) iron rod had been hammered into the chest of the man – thought to have been between 40 and 50 at the time of death – and a part of the left leg below the knee was separately placed next to the rest of the skeleton. It is presumed that the leg may have been sawn off, to stop the vampire from ‘escaping’ the grave.

Was this a real vampire? Nobody knows for sure. Read more about this dig at rt.com