When author Julia Dumont created her leading lady, Cynthia Amas, for her Second Acts novels, she had no idea how domineering her character would become. Cynthia, a man-challenged matchmaker who is brilliant at finding love for everyone but herself, insisted on writing her own dating advice blog (coming in the third novel). Julia tried to explain that fictional characters don’t usually write advice blogs for real people, but Cynthia was undaunted. The result is not your average dating blog, but it’s just as funny, irreverent and delightfully crazy as Cynthia.  Should you take her advice? Read on and decide for yourself. 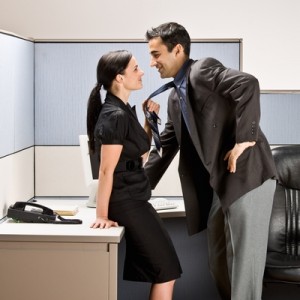 My friends think my boyfriend, Marty, is a total sh*t. They all say I’m crazy to stay with him. He’s sexy, funny, makes a ton of money, and is incredibly fun. Yes, he has fooled around on me in the past, but that was years ago and we got through it. He swears he’d never do it again and I do believe him. But when he travels once a month to his company’s headquarters in San Diego, he seems to spend a whole lot of time with his pretty female colleague, who, in turn, at least in her Facebook photos, seems to spend most of her time in a bathing suit…a skimpy one. There are a few photos with the two of them standing a little too close in group shots. He swears nothing is going on, but there have been other fishy details: late-night meetings, unanswered voicemails, long periods of “no service” on his cell. But I can’t help it. When he’s gone, I miss him terribly and when he comes home he’s so sweet to me I start to think I’m paranoid. I’d appreciate your opinion.

I’m wondering too. Wondering if you were dropped on your head as a child. Repeatedly. Ten years? You want my opinion? Are you sure you do? Step one: Dump him. Step two: Go out with somebody else. Immediately. Step three: Do not pick up his calls. Step four: Wait. If he doesn’t show up at your door in tears in forty-eight hours, dump him for good. And I don’t mean sniffles and whimpers, I’m talking full-blown weeping and blubbering. Step five: Tell him to “unfriend” the bitch on Facebook, take you on the next trip to San Diego, where you will proceed to mark your territory all over town, and then treat you to a vacation in someplace much, much, much more exotic. Plaster those photos all over the internet until they go freaking viral. If he complies with all of the stipulations of Step 5, take him back. Failure to do so constitutes a deal breaker. Null and void. Period. Kaput. Bye-bye.