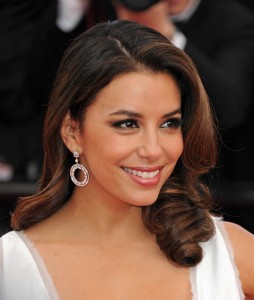 The Woman
Eva Longoria captured our attention as the difficult, but loveable, Gabrielle Solis on the acclaimed television show Desperate Housewives, which premiered in 2004 on ABC. The actress received accolades for this character and became a major celebrity as a result, but this was not her first role on the small screen.  We first saw her in her role as the mentally unstable Isabella Braña in daytime soap opera, The Young and the Restless, from 2001-2003. Not only she has been recognized by television institutions, she has been featured prominently in women’s fashion magazines, such as Marie Claire, Harpar’s Bazaar, and Vogue. Talented and beautiful, Longoria has been named one of America’s hottest stars by FHM, People, and Maxim magazines. In honor of Maxim’s 100th issue in 2006, Longoria’s 2005 cover photo was featured on a 75 foot by 100 foot replica in the Nevada desert, which was visible from satellites in space.

Longoria also has an astronomical passion for philanthropy, and devotes much of her time to many different causes including, PADRES Contra El Cancer, OmniPeace, Project Home, among others. She has been called upon by President Obama as an advisor on Latino issues, and is actively pursuing her Master’s in Chicano Studies. Despite dedicating much of her time to these foundations and causes, Longoria was inspired to create her own charity in honor of one of her sisters.

Although she is one of our She-roes, Longoria created an organization called Eva’s Heroes on behalf of one of her own. Longoria grew up with an intellectually disabled older sister, Elizabeth, who Eva explains as a person she has always admired. “She has given me so much inspiration and hope to face every day with the strength and courage she has had her whole life,” Longoria says. “She has never seen herself as having a disability, and only sees the good in everyone and everything.” Longoria explains that this issue is “extremely close to [her] heart,” which ultimately led to the initiation of Eva’s Heroes in 2006. The foundation is “dedicated to enriching the lives of individuals with intellectual special needs by providing an inclusive setting built on four tenets: interact, grow, learn, and love.” The foundation benefits individuals in the San Antonio area by organizing activities, after school programs, and summer curriculums for teens and young adults ages 14-21, with an emphasis on acceptance and inclusion. Whether it is participating in activities, such as swimming, dancing, or watching a movie, Eva’s Heroes is dedicated to encouraging individuals to be self-sufficient and confident. Eva explains, “we need to make sure there are no barriers for every person to actively participate in society.”

Longoria hosts a celebrity poker match annually to raise funds for Eva’s Heroes, but there are ways that anyone can get involved in this cause. Visit evasheroes.org for ways to donate, volunteer, and join the mailing list. Celebrate one of our Sheroes by supporting Eva’s Heroes!