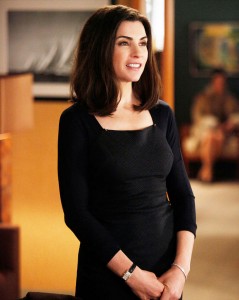 *Update Julianna Margulies has been nominated for a Best Actress Emmy for her work on The Good Wife.

Julianna Margulies came into the spotlight with her Emmy winning role as Nurse Carol Hathaway on NBC’s medical-drama ER.  After six years on the successful show, and six Emmy nominations—including one win—for Best Actress, Margulies decided to depart ER in 2000 and dazzle us with her acting ability in a variety of projects including voice work for Disney’s Dinosaur, and acting roles on Scrubs, and The Sopranos.

In 2009, Margulies signed on to play the lead character, Alicia Florrick, in The Good Wife—the celebrated CBS show revolving around the life of a female attorney who returns to her practice after her State Attorney husband is involved in a high profile sex and corruption scandal.  The role has touched hearts and earned Margulies a Golden Globe, an Emmy, a SAG award, and a Television Critics Association Award for Individual Achievement in Drama, not to mention six more nominations.  Recently, Margulies has started to produce episodes of The Good Wife as well.

Julianna Margulies may have become famous for her role as nurse Carol Hathaway on the medical-drama ER, but it is the medical work she has supported off-screen that makes her a true star.  Julianna is passionately dedicated to Project A.L.S., a non-profit organization started by her friend, Jenifer Estess, who was diagnosed with A.L.S., more commonly known as Lou Gehrig’s Disease, in 1998. Project A.L.S. helps raise funds to support doctor’s research to find cures and treatments for the fatal neurodegenerative brain disease.  From day one Margulies stood by Estess’ side, and since her passing has continued to dedicate her time to spread awareness about A.L.S. and raise money for the cause. For her 2007 wedding, Margulies requested her guests donate to Project A.L.S. instead of giving gifts, and is constantly hosting benefits and fund-raisers to support the project.  When asked about her role in Project A.L.S., Margulies responded “As a celebrity, it’s my responsibility to give a voice to a cause. That’s what I can do to help. But when I meet the doctors who’ve been working with Project A.L.S. and learn about their research, I feel so inadequate. They’re the ones who are doing amazing things.”

Visit http://www.projectals.org to support the cause and learn more about the disease and the progress Project A.L.S. has made towards curing it.