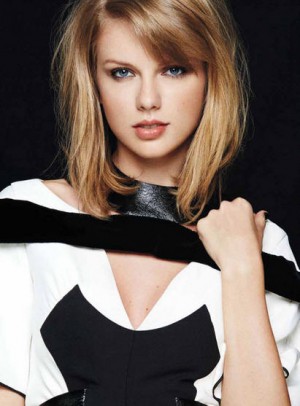 As if this year hasn’t already been big enough for Taylor Swift, it appears even further congratulations are in order for the country-gone-pop singer. Billboard announced yesterday that her new single “Blank Space” has taken the top spot, which gives Swift the incredible distinction of being the first woman in the chart’s 50-plus year history to replace herself at number one on the Hot 100.

Last week, Swift was sitting on top with “Shake It Off”, the leading single from her recently-released album 1989, which is currently enjoying a third week at number one as well. “Shake” has (so far) topped the Hot 100 for four non-consecutive weeks.

Born on December 13, 1989, in Wyomissing, Pennsylvania, Taylor Swift started crafting songs at age 5, and at age 16, released her debut album. Hits like “Love Story” and “You Belong With Me” appealed to country and pop fans alike and helped fuel the multiplatinum success of her albums.

In 2008, Swift was nominated for a Grammy Award in the Best New Artist category, and won the Academy of Country Music’s “Female Vocalist of the Year” Award, the American Music Awards “Favorite Female Country Artist” award, and the American Music Association’s “Horizon” award. Around this same time, Swift released her next album, Fearless (2008), which hit the top of both the country and pop charts and stayed there for 11 weeks. By the end of the year, Swift had become the highest-selling country artist of 2008.

With her fourth album, Swift became the first woman in history to release two albums that sold more than one million copies in their opening week. She was ranked No. 1 as Forbes magazine’s highest paid celebrity under 30 in 2012, beating out Justin Bieber, Rihanna and Lady Gaga with a salary of $57 million.

For such a young girl, she has had her fair share of love and heartbreak. Her famous suitors include Joe Jonas, Taylor Lautner, Jake Gyllenhaal, and John Mayer. Each ex-lover seemed to inspire a new hit song. Selfishly, let’s hope she keeps finding guys to write great songs about!

She took a sizable chunk of her income and has generously donated it to charity. Swift spent  4 million dollars to fund the Taylor Swift Education Center at the Country Music Hall of Fame in Nashville. The facility has three classrooms, a learning lab and a space dedicated to exhibits for children.

She was the most charitable celebrity of 2013, according to the social change nonprofit DoSomething.org. The pop star topped the organization’s annual “Top 20 Celebs Gone Good” list for the second year in a row thanks to the $100,000 donation she gave the Nashville Symphony on the occasion of her 24th birthday. She was also recognized for her headlining gig at a London benefit for homeless youth.

Shake It Off Music Video:

And watch her crazy side come out in Blank Space