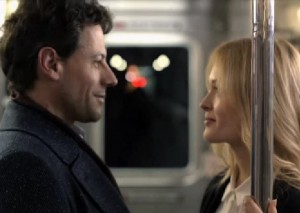 ABC’s new drama Forever centers on a New York City medical examiner Dr. Henry Morgan (Ioan Gruffudd) who’s also immortal. He uses his experience from his long, long life — 200-plus years — to help solve the cases he’s presented. There are some constants to the mythology of Henry Morgan: Whenever he dies and shows up in another place and time, he always arrives in water and he’s always naked: “A little something for the audience,” quipped executive producer Matt Miller.

And he won’t die in every episode. Even though Henry Morgan is immortal “the character experiences the pain of the death. We don’t want to kill him every episode — give him a week off. I think he dies three or four times in the pilot which is a bit much,” Miller said. Later in the series, Morgan will experience only “special occasion deaths,” Miller said.

But any explanation of why he’s immortal will unfold very slowly: “Not over 13 episodes or even a full season,” Miller said.

Miller said he thought about the concept of immortality and realized that it would mean the pain of watching one’s own children grow old and die. He said that reality informed the decision to make the character a medical examiner, obsessed with studying the human body so he might break his own “curse” of immortality.

You can watch the trailer here: