Behind every great man there is an even greater woman. Sometimes you have to look beyond the elaborate beard to see her though. The strong women featured on the History Channel’s epic series Vikings, have come out from behind their bearded counterparts and shown us some television worth watching!

The cast of characters: 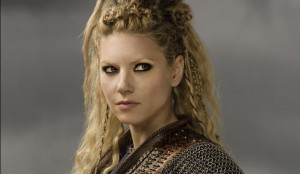 Lagertha Lothbrok (played by Katheryn Winnick) is the wife of Ragnar and a fierce shield-maiden (woman who has chosen to fight as a warrior). She has fought alongside her husband and shares his lust for adventure. 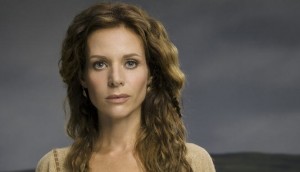 Siggy (played by Jessalyn Gilsig) is the shrewd widow of Earl Haraldson. Siggy has lost her husband, all of her children and her authority in Kattegat, but has not lost her desire for power. 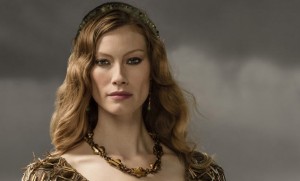 Aslaug (played by Alyssa Sutherland) is the clever and beautiful daughter of the famed dragon slayer Sigurd and shield-maiden Brunhilde. The aristocratic yin to Lagertha’s scrappy yang, Aslaug is a positively shimmering demi-goddess amid the general grime of Kattegat. 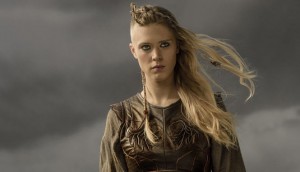 Porunn (played by Gaia Weiss) is a shield-maiden that will not be tamed by any man and Bjorn (the son of Ragnar and Lagertha) must learn to accept this before Porunn can accept his love.

The third season of the Canadian-Irish historical drama television series Vikings premiered on February 19, 2015 on History in Canada and in the United States.

Filmed in Ireland, Vikings is inspired by the tales about the Viking Ragnar Lothbrok, one of the best-known mythological Norse heroes and notorious as the scourge of France and England. It portrays Ragnar as a Viking farmer who pioneers the first daring raids into England with the support of fellow warriors, his brother Rollo, and his ex-wife, the shield-maiden Lagertha.