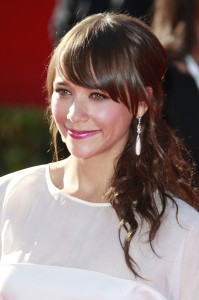 Rashida Jones, daughter of Quincy Jones, is a well-known and welcomed face in most families.  After landing small parts in various productions such as the cult television hit Freaks and Geeks, she went on to land a supporting role in Boston Public.  Her work gained her a NAACP Image Award nomination, and she started appearing in more roles from movies such as Full Frontal and Little Black Book, to TV shows such as Stella and Chappelle’s Show—both on Comedy Central.  Jones was about to retire from acting to pursue a graduate degree in public policy when she was offered the role of Karen on The Office, a role that shot her up from notable actress to comedic superstar.  After The Office, Jones went on to star in the popular Parks and Recreation on NBC, acted in movies such as I Love You, Man, The Social Network, Friends with Benefits, Our Idiot Brother, The Muppets, and Celeste and Jesse Forever (which she also co-wrote). When she isn’t acting on camera she is providing her voice to animated series such as Robot Chicken and The Simpsons.

Jones’ talents reach beyond acting as she also has a passion for writing and music. She provided backup vocals for Maroon 5 on their first album, and sung on television soundtracks including The Baxter and Reno 911!. In 2013 she directed the music video for Sara Bareilles’ song Brave, which was her first time directing, however she wasn’t a stranger to music videos.  Jones has starred in videos for acts from Aaliyah to The Foo Fighters.  As if she weren’t busy enough, Jones also co-wrote a comic book series which she has already optioned into a film and will write the screenplay. You can also find Jones lending her talent to a myriad of web series and most recently, she has signed on to produce a new sitcom for ABC called Girls Without Boys.

With clear homages to the short-lived Police Squad! from 1982, its Naked Gun spinoff film franchise and Get Smart,whose 2008 big-screen reboot was fronted by Steve Carell, the half-hour Angie Tribeca is seeking shameless hilarity at the expense of the forces of law and order and everyone else. So well dissected by Tribeca, it will be hard to watch the likes of Law & Order or other so-called serious police procedurals without a giggle now.

From the pilot, written by the Carells and directed by The Big Short star onwards, there are cameos by the boatload. Bill Murray, real-life L.A. Mayor and SAG-AFTRA cardholder Eric Garcetti, Keegan-Michael Key, Rashida’s real life parents Quincy Jones and Peggy Lipton, Lisa Kudrow and James Franco plus many more come at you fast and furious and funny just like the whole series.

Rashida Jones loves to keep busy and she has added her love for The International Rescue Committee (IRC) into the mix.  Jones visited Thailand and stopped at a refugee camp that the IRC provided assistance to.  Viewing the determination of all of those at the camp to continue to live and move past undeniable hardships, she was touched by the tenacity of the human spirit and wanted to lend her support.  Describing the IRC Jones has said, “The International Rescue Committee—IRC—was founded in 1933 to help people escape Nazi Germany, and now offers food, water, and healthcare to people displaced by emergencies or war. Once those people are resettled, the IRC helps them become citizens and integrate into their new culture.” Jones provides fundraising for the IRC and helps raise awareness of the cause.

Visit the IRC website where you can purchase gifts that will directly benefit those rebuilding their lives, or learn how to organize a fundraising event for IRC.