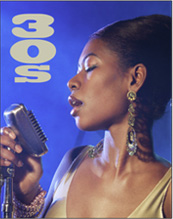 As a woman in the 1930s you were, above all, modern. You had ingenuity, smarts and guts. Faced with the worst economic crisis in history and the threat of fascism abroad, you managed to do it all. One out of every four women worked outside the home in offices, hospitals, school, and factories. The others worked as homemakers and the expectations were huge! You were a budget-savvy cook, a meticulous housekeeper, a witty hostess, well-groomed with neatly coiffed hair and the emotional pillar of your family. This was a multi-tasking, 24/7 job (always has been). The weaker sex?  Hardly. The women of the ‘30s proved it, even if the men weren’t ready to admit it. Despite everything that was going on, you saw to it that the deep desire — truly the need — for laughter, love, friendship, passion and fun prevailed.

Girls Just Want To Have Fun and Then Get Married

And dating was all about fun. The more dates the better. The rules meant that boy’s did the asking, paid for the date and provided transportation, In return, he expected some show of affection — a good night kiss or petting would do, since sex before marriage was an absolute no-no.  Dating etiquette required you to smile, look interested, sit like a lady and not drink too much. Dates were about going to the movies, dances, getting something to eat — just like today. If you could afford something special, there were glamorous restaurants and night clubs. Everyone would dress” to the nines” in beautiful gowns and perfect, elaborate hair dos. Although many held off on marriage due to finances, marriage was actually on the rise and divorce was in decline.  Birth control was available (thanks in large part to Margaret Sanger), although it wasn’t widely used yet. The birthrate may have dropped during the depression, but women still had babies and the average family had 3.6 children.

As married women settled in to domesticity, they relied on their creativity and intelligence to handle the wide range of required tasks.  From home decorating and table-setting to household management and budgeting, to the more labor-intensive cooking, cleaning, washing, and sewing, the 1930s homemaker was truly a Renaissance woman. For women living in the city, where electricity was now common place, there were lots of modern gadgets — pop-up toasters, electric mixers, can openers, and even electric washers. Early in the decade most homes had an ice box, but by 1935 almost half had refrigerators. Milk and dairy products were delivered by the milk man in a horse-drawn cart. (Trucks didn’t come until later.) Packaged foods were considered expensive, but some of the popular ones still endure today, including Ritz Crackers, Lay’s Potato Chips, Kraft’s Macaroni & Cheese, Skippy Peanut Butter. Despite the dreary economic times, women took pride in sprucing up their homes and expressing their personalities. Bright colors and bold patterns seemed to be the perfect antidote, whether it was in updated kitchen floors or fun color-coordinated dinnerware and bathroom accessories. The good news — almost all middle class homes had a complete bathroom which included a flush toilet and tub!

The media went to great lengths to make homemaking sound like an exciting profession, with the unspoken goal of keeping women out of the work force and not taking men‘s jobs.  Advertisements portrayed homemaking as an adventure providing “an education in color, mechanics and chemistry.” Those ad men were so creative! They may have been pandering to potential consumers, but homemaking became respected. The 1930s Census for the first time included instructions that one member of the household be designated as a homemaker. This eventually led to Home Economics as a course taught in schools, turning household chores into a “science.”

Mirror, Mirror on the Wall…

Women of the ‘30s took good care of themselves with a little help from Max Factor and Helena Rubinstein. There were cleansing creams, masks, lotions, powder, rouge, lipstick, nail polish, perfume — all available to enhance one’s beauty. Women were encouraged to brush their hair nightly to keep it silky. As they said “to be beautiful and natural is a woman’s birthright!” The efforts to be well-coiffed were enormous. Finger waves and elaborate hairdos with curls and ringlets were in vogue and required skill and patience. Beauty shops offered a range of services such as facials, body contouring, and hair perms using an elaborate machine that screamed “Beam me up Scotty.”  Jean Harlow inspired women to color their hair, but many considered it scandalous.

Does This Make Me Look Fat?

The cities were filled with great opportunities for shopping. There were big department stores, like Saks Fifth Avenue and Macy‘s, and smaller dress shops and milliners,   Dresses were slim and elegant, with hemlines following the stock market, way below the knee. A popular style was a simple print dress with a waistline. Consumers were frugal and styles changed slowly. There was little pressure to be a fashionista. Many women sewed their own clothes using patterns from McCall and Butterick. There was a new way to cut clothes — a cross cut bias — which gave dresses a beautiful flow, but showed every bulge. To wear these jersey dresses, you needed to be ultra thin. Proof that designers have been torturing women for decades!

If I can Dream It…

This was the Golden Age of Hollywood and there was no better escape from the rigors of daily life than the movies. Going to the theater was glamorous and cheap. For 27 cents you entered another world — elegant and rich with its over-stuffed seats, plush red carpets, brilliants lights, and shiny brass railings. Romantic comedies gave you entry to the world of the rich that was filled with witty banter, chic clothes, romance, fun and laughter. You watched Fred Astaire and Ginger Rogers dance the night away and swooned over Clark Gable and Errol Flynn.  In the dark theater, you felt that anything was possible. Your dreams could come true.

Working Women
As the economy worsened and men lost their jobs, many more women joined the work force. They were secretaries, telephone operators, teachers, nurses, and laborers. They were becoming more independent and their status was enhanced by their new roles. Men resisted, insisting that a woman’s place was at home being mothers, cooks, housekeepers. Sometimes a working woman was considered to have taken a job from a man and resented for it. Some women even lied about their marital status just to keep their jobs.

The World Turned Upside Down
The stock market crash of 1929 was scary, but no one could imagine the devastation it would ultimately wreak. Soup kitchens, bread lines, farmers and their families fleeing from the Dust Bowl, and so many people unemployed. Roosevelt’s New Deal declared that government could, and would, step in to lift the country out of the Depression. With his Fireside Chats, Roosevelt was like a reassuring father. From the Work Progress Administration that got people back to work, to unemployment insurance, men and women felt that someone now had their back and they were grateful.  At the same time Europe was in political turmoil and fascism was on the rise. The United States held tight to its policy of isolationism. Americans watched and waited, neutral observers, as Hitler and Mussolini gained power. It was a world away you said to yourself, hoping that was true, but fearful nevertheless.

The Beginning of the Modern Woman
The 1930s began to lay the case for what women were truly capable of. There were high expectations and huge responsibilities. You were courageous and multi-talented, but didn’t need to toot your own horn — yet. Your strength was evident to all, even though social norms meant it wasn’t acknowledged. Either way you were marching ahead, gathering momentum for the 1940s, when you would be given permission to stretch your wings!