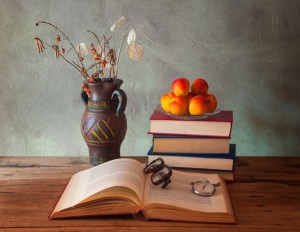 The first line of a fiction novel is so important that the most famous are instantly recognized:

“It was the best of times, it was the worst of times…” (A Tale of Two Cities by Charles Dickens)

“Happy families are all alike; every unhappy family is unhappy in its own way.”(Anna Karenina by Leo Tolstoy)

“It is a truth universally acknowledged, that a single man in possession of a good fortune, must be in want of a wife.” (Pride and Prejudice by Jane Austen)

My son and husband just love the new sci-fi hit The Martian by Andy Weir, about an astronaut stranded on Mars; it begins with “I’m pretty much f–d.” Memorable first lines grab the reader’s interest, introduce the style or voice of the novel, and create expectations that the author will satisfy or confound. Many stock opening words set the scene, but the best go way beyond “It was a dark and stormy night.”

Consider how George Orwell’s initially standard start to his novel 1984 is disturbingly transformed by the last word: “It was a bright cold day in April, and the clocks were striking thirteen.” Some first lines hook the reader immediately by jumping right into action, as in Toni Morrison’s Paradise: “They shoot the white girl first.”

Other fiction openers present a thesis or opinion before moving forward, beginning with a statement that engages or challenges the reader’s experience and that grows in impact by the novel’s last words. Austen and Tolstoy succeeded in the examples above. First lines also can draw in readers with suspense–about what will be revealed about events (The Martian), or about the narrator as in Albert Camus’ The Stranger (“Mother died today.”), or about both as in Kurt Vonnegut’s Slaughterhouse Five (“All this happened, more or less.”) Test yourself on how many first lines are etched in your memory with this quiz courtesy of The Christian Science Monitor: http://www.csmonitor.com/Books/2014/0612/Famous-opening-lines-Take-our-literature-quiz/Question-110