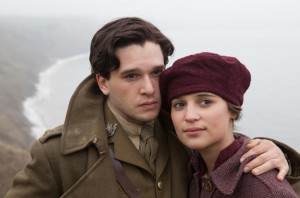 “Inspirational stories for the damned” is the label given by one blinded soldier to survival tales like his in Testament of Youth — it’s also an apt description of this rousing, robust adaptation of Vera Brittain’s landmark First World War memoir. Previously adapted by the BBC as a television serial in 1979, Brittain’s 1933 tome has taken decades to reach the big screen.

“It’s such an amazing story,” said Vikander, who worked with a dialect coach to perfect her British accent. She had read a lot about the First World War but hadn’t seen the conflict from a female perspective until she read Brittain’s book. “It is such a story about youth.”

Kit Harrington (Game of Thrones’ Jon Snow) plays the Roland Leighton, the fiancé of Vikander.  Leighton would go on to become a soldier on the front lines, which was partially responsible for Brittain choosing to leave Oxford to become a war nurse.

When asked if he had every played a real person before, Harrington told Variety, “No, I haven’t. I thought I would have a ghost on my shoulder the whole time, but I didn’t. I was just very happy to have this source material, the book, to really find out who he was. And I had these letters he’d written, I could read them every day and remind myself of the kind of stupid and brave young man he was. He was a teenager experiencing first love while being shot at on the front.”

In her memoir, Brittain spoke for the ones who couldn’t speak, who were robbed of their futures for reasons they couldn’t understand at the behest of men who couldn’t have explained if they’d tried. Watching the final scenes of Testament of Youth, it’s clear that her stand on war is as outspoken today as it was then.

Watch the Trailer below: