Far From the Madding Crowd , Thomas 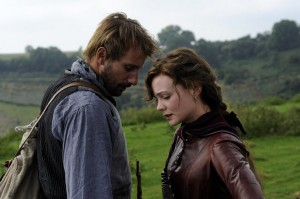 Hardy’s fourth novel (first published in 1874) and his first major literary success, has been adapted for the Big Screen and opens in theaters this weekend.

Hardy knew how to write epic novels and love stories (Tess of the D’Urbervilles, Jude the Obscure). Far from the Madding Crowd tells the story of the young farmer Gabriel Oak and his love for and pursuit of the elusive Bathsheba Everdene, whose wayward nature leads her to both tragedy and true love.  The first of his works set in Wessex, Hardy’s novel of swift passion and slow courtship is imbued with his evocative descriptions of rural life and landscapes, and with unflinching honesty about sexual relationships. On the most basic level, story is about two people getting to know and trust each other very slowly, while everything around them changes dramatically.

Carrie Mulligan plays the elusive Bathsheba, whose performance is sharp and emotional. She is paired with Matthias Schoenaerts, who plays the charming Gabriel Oak. Schoenaerts and Mulligan have palpable chemistry; he’s so indelible as this hearty man of the earth that it makes you believe the porcelain Mulligan has done a day’s farm labor in her life.

The screenwriter David Nicholls (One Day, Starter for 10) cut his teeth on pedigree adaptations with Mike Newell’s Great Expectations in 2012, but Far From The Madding Crowd may be a trickier prospect. Hardy’s novel is over 300 pages long. The film, directed by Thomas Vinterberg, opens May 1, 2015.