The Infinity Diaries , written by Devin Morgan, is the story of Aris, an Immortal Vampire who has been searching through time to find Sarah, his only true love. Once Aris finds Sarah, a human living in modern-day Chicago, he realizes that not only must he convince her his love is real, but also that he must protect her from DeMarco, the Vampire King of Spain, who is vying for Sarah’s love.  DeMarco is willing to risk war between Aris’ Immortals and his own legion of Vampires to destroy his arch rival, take Sarah for himself, and finally gain control over the Immortals’ advanced powers.

Devin Morgan is not only a writer of thrilling romance novels by night, but also a practicing clinical hypnotherapist and founder and director of the Rishi Institute where she teaches hatha yoga by day. Before Devin focused on all three of these careers after she shuttered her corporate business as a printing broker, she embarked on a mid-life journey to the Middle East in a search for personal happiness.

Devin’s greatest joy, however, is derived from reading and writing books. Sharing her knowledge and stories, both real and imagined, with readers around the world allows her to touch so many more people. She began writing non-fiction books on subjects related to health and wellness. Now, she is leaping into the world of fiction with a brand new twist on vampire romance in her Infinity Diaries series, a trilogy of death, love and reincarnation.

Aris Reigns is the third (and newest) novel in the Infinity Diaries series. We caught up with author Devin Morgan to learn more about Aris, writing and her life. Here’s what we found out:

TLS: What inspired you to write the Aris series?

Devin: There are two major “events” that inspired the trilogy. The first was the “Twilight” series. When I went to the movies I saw that half the audience consisted of middle-aged women. I decided that age group deserved a grown-up vampire with a purpose to read about. The second was one of my own hypnotherapy clients named Aris. A handsome young man who has a fascination with vampires. Our conversations led me to write Aris of the Immortals.

TLS: Tell us about the message in your books.

Devin: The message in my books is that a society can live in peace and harmony when there is no fear. Human fear of death, poverty, the unknown, any fear leads us to distrust, hate and war. To live a fearless, loving life gives one the peace and calm we all seek.

TLS:  What makes your vampires different from other vampires?

Devin: An Immortal—the offspring of blood-drinking aliens and humans–is a new bloodline of vampire only recently unveiled to humans. A scientific team of aliens arrived on Earth before the beginning of recorded human history to explore a previously uncharted planet. Here they discovered that human blood was an essential nutrient if they were to survive for any length of time on Earth. Over the centuries the aliens synthesized their venom and human blood, which allowed Immortals to adapt to Earth’s environment and the ways of humans without losing their super-human powers or needlessly taking human life. They are able to move about in sunlight, are visible in mirrors, eat garlic, enter churches, and sleep in a regular bed! Immortals have evolved over the centuries they have been on Earth due to their high intelligence.  Hidden from human view in the Catacombs, they have developed a cohesive society with clear, strict rules of ethical conduct. Any Immortal who does not follow these rules is subject to the ultimate consequence—death for all time.

Immortals no longer need to drink human blood to survive, as opposed to Vampires. Immortals experience deep feelings of love—sometimes with humans, who they respect and sometimes protect—even against other, less evolved Vampires. Immortals are closer to the Gods, while Vampires are closer to a vicious animal that kills out of pure blood lust. Vampires are blood suckers without a conscience.

TLS: Aris lived in the time of Alexander the Great and was part of the court of Henry VIII — How did you research the history in this book?

Devin: Research for my books was the easiest part of writing. History is my hobby and my passion and the Tudor era is my favorite.

TLS:  Aris is such a handsome and seemingly perfect man/Immortal, did you base this character on someone you know? 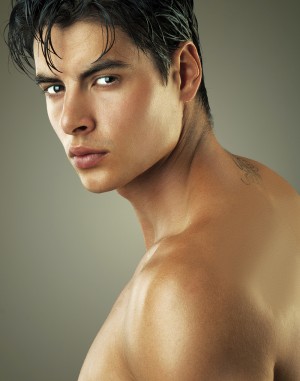 Devin: The Aris of the novels is based on my ideal man.

TLS: Is your Sarah character a lot like yourself, or is she very different from you?

TLS: Tell us about the Catacombs and what they mean to the story.

Devin: The Catacombs is the kingdom of the Immortals, a civilization residing deep beneath the ground in England. The Catacombs is a place of peace and learning. The greatest minds of the Immortal race live in the kingdom under the rule of Queen Akira and King Khansu. The King and Queen chose to remain on earth when the alien explorers from their planet returned to their own galaxy thousands of years in the past. Akira and Khansu were more than interested in the human race and chose to stay behind to study them. After many millennia and many earthly cataclysmic events, the society founded and built their place of solitude and safety beneath London. The Catacombs is the seat of government for the Immortals and the scientific stronghold of the race.

TLS:  You are a hypnotherapist and in the novel, the main character, Sarah Hagan, is a psychologist who uses hypnotherapy on her patient Carlos to try to understand why he has such anger issues. This is a great device to get to your vampire Aris. Can you tell us a little bit about hypnotherapy and what it can do for people?

Devin: Hypnotherapy is not an exact science. It varies from one subject to another. Basically, it is a state of extreme relaxation of the body and mind, a state where positive suggestion stated by the hypnotherapist is taken in by the sub-conscious mind and acted on by the conscious. Hypnotherapy can be a great help in issues of pain management, weight loss, low self-esteem and PTSS. In the qualified hands of a trained hypnotherapist, issues and barriers that conventional talk therapy have a hard time reaching, can be confronted and changed.

TLS:  What was your biggest fear about writing these books?

Devin: This is pure passion, I had no fear in about writing my books. It was nothing but great fun!

TLS: What was the hardest part of writing the series?

TLS:  Any advice for other writers who are thinking about writing a novel?

Devin: Advice to writers who want to create a novel . . . sit down and write and write and write. Going to Starbucks with your laptop and staring into space, telling everyone you have writers block simply won’t get you anywhere. You must write word by word to accomplish your goal. Whether you are writing great things or things you end up deleting, writing is the only way to ever reach “The End.”

TLS: What are your writing rituals?

Devin: I write something every day be it work on a novel or in my journal or in letters. Writing is a way of life for me.

TLS:  Tell us about your favorite authors and why you love them.

Devin: I love Margaret George for her historical novels (The Autobiography of Henry VIII, Mary, Queen of Scotland and the Isles, The Memoirs of Cleopatra, and more). Her research is above and beyond, and her choice of words and phrases cause me to read passages over and over.

Deepak Chopra, M.D. (the poet-prophet of alternative medicine, author of 80 books including Super Brain and founder of The Chopra Foundation) for his ability to put spiritual concepts into easy to understand language. And his ability to teach about health and well-being in the same easy to comprehend manner.

Ann Rice (author of over 30 books, including Interview with a Vampire and most recently the Toby O’Dare novels Of Love and Evil, and Angel Time)for her amazing ability to create pictures with words.

Rosalind Miles (I, Elizabeth, Isolde, Queen of the Western Isle) for her ability to look inside her historical characters and present them as real people that readers of today can understand and relate to.

Dan Brown (The Da Vinci Code, Inferno) for his ability to make it impossible to put down his books.

TLS: How did your interest in writing originate?

Devin: I have made up stories since I was a very small child. Once I began to read, I fell in love with disappearing into another world created for me by the books I read. Once I learned to hold a pencil in my hand, I began to write my own worlds. I am a child of imagination and fairy tales.

TLS: What’s next for you?

Devin: I have begun a novel about the Catacombs and the Immortals who live there.

TLS: Can you tell us a little about your hobbies/other interests?