(Back in the 1980’s, True Love Magazine had a monthly essay contest for its readers. The theme was, The Life I Live. Here is the winner of the February 1980 issue. ) 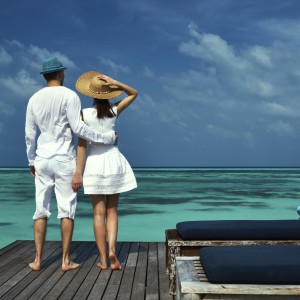 The past few weeks have been the happiest ones of my life. They have been filled with the joy of my engagement to Jim, a man I love and, yet, have never seen.

I am blind. There was a time not too long ago, when I wouldn’t have believed that I could feel so fulfilled without the benefit of my sight, but meeting Jim has changed all that.

Three years ago, I was driving home from a friend’s house, when the steering went out in my car and I crashed into a parked pickup truck. Although I suffered only a cracked wrist and some bruised ribs, a piece of glass from the shattered wind­shield was lodged in my left eye and caused me to go blind. Thankfully, my right eye was undamaged—until I contracted sympathetic optholmia. That’s a disease which occurs, when one eye is struck blind by an injury and the other, healthy eye also loses its vision, even though there is nothing medically wrong with it. I was heartbroken. The thought of having to go through life never seeing sunsets was unbearable.

For the first couple of months after the accident, I became a recluse, wallowing in self-pity, and refusing to see anyone except my parents. I probably would have shut them out, too, but I needed somebody to help me get around. But gradually, I came to realize that life is what you make of it, and that all the self-pity in the world wouldn’t bring back my precious sight. So, with my new attitude, I began attending classes at an Institute for the Blind. I learned to read and write in Braille, and generally, how to get along. I lived at home, and my parents gave me all the love and support that anyone could ask for.

I applied myself to my studies, and began to enjoy my time at the In­stitute, as much as I had my time at college. I even took some special education classes, and at the end of two years, I became an assistant teacher in a class for blind children. Although I had never been religious before, I began going to church regularly. Soon, I became involved with many projects such as bazaars, picnics, and charity dinners. The people I met were so kind and warm toward me that, for the first time since the accident, I felt perhaps there was a reason for my blindness. I felt a oneness with God that I had never before experienced, and I learned to accept Him into my life.

I have to say that God was responsible for all of my blessings because it was through church that I met Jim. Jim was also involved in the church that I at­tended, and he was introduced to me by a mutual friend during one of the picnics that our people had organized. We began to talk, and I found myself telling Jim things that I had never told anyone else. He was sweet and understanding, and fit every cliche about how a first true love should be. We spent a lot of time together, taking walks, holding hands, and laughing. It wasn’t too long, before I realized that I was deeply in love with him.

One evening, as we were walking along the beach, just before the sun went down, Jim took my hand and said, “I can’t think of anything to give you that’s more beautiful than a sunset. I know you can’t see it with your eyes, but maybe, you can see it with your heart.” Then, he asked me to marry him.

It won’t be long before Jim and I will be living in our own house, and I count the minutes until then. He’s everything I ever wanted in a husband, and while he can’t give me back my sight, he can still make me see. He gave me a sunset. What more could I ask for?