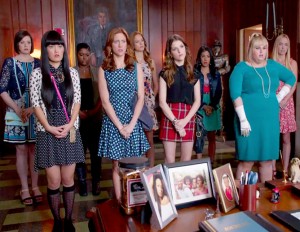 back into the spotlight in Pitch Perfect 2, which takes over theaters on May 15. Get ready for the Aca-pocalypse!

“Pitch Perfect” — 2012’s sleeper hit about an all-female college a cappella team competing for a national championship — was the smash hit that nobody saw coming. Produced for a paltry $17 million, the film turned into a global sensation, raking in over $112 million, turning Anna Kendrick into a bona fide star, and firmly securing its soundtrack a place on the iPods of aca-lytes worldwide. For a musical comedy produced by a woman (Elizabeth Banks), written by a woman (“30 Rock” alum Kay Cannon) and starring a whole bunch of women (Anna Kendrick, Brittany Snow, Anna Camp and Rebel Wilson, who all returned for the sequel), it also served as proof that a female-centric comedy could do serious damage at the box office, even with nary an Avenger in site.

There’s a Hollywood recipe for making sequels that you might call the “Hangover” technique. Take the same characters that were in the original, put them into the same situation, tweak slightly, then hope moviegoers don’t notice — or at least don’t care. The greatest selling point of “Pitch Perfect 2” is that it doesn’t follow that lazy formula, and the result is a comedy that, if not always better than the first, is certainly more uproarious.

Banks sits in the director’s chair this time around and has already been approached about a possible third film in the series. “I’m really focused on putting this movie out and then letting the audience tell us what to do next,” she says.