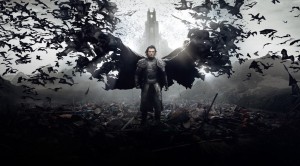 Just when you thought you knew everything about Dracula, a new twist in the storyline has been discovered in the new film, Dracula Untold, which opens in theaters this Friday (October 10).

Rather than focus on Irish novelist Bram Stoker’s 1897 novel Dracula, the film creates an origin story for Count Dracula by portraying the story of Vlad the Impaler, who uses dark powers to protect his family and kingdom. In order to save his son, his wife Mirena and the kingdom he loves, Vlad journeys to Broken Tooth Mountain, where he encounters an ancient sorcerer, Caligula, and enters into a Faustian bargain—one that gives the prince the strength of 100 men, the speed of a falling star and enough power to destroy his enemies. However, he will be afflicted with an insatiable thirst to drink human blood. This ultimately leads him to embrace his destiny as the legendary vampire Dracula.