(Continued from Previous Post)
A child can be raised in a home where both parents work and still feel loved and wanted. This wasn’t so in Joan’s case. Her parents’ jobs and socializing almost virtually excluded Joan from their lives. Since she was raised by an old grandmother, unable to give her much attention, Joan felt insecure to the point where she terribly resented her parents. However, since we are taught we must love our folks, Joan felt mean and guilty for having quite the opposite feeling. 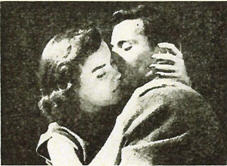 Hungry for love, Joan fell for Bob when he began dating her. She soon realized he didn’t care in return and only desired her physically. In probing the psychological reason for Joan’s affair, it grew out of an unconscious desire to punish herself for hating her parents . . . and she continued the affair for the same reason, though she knew it could never lead to marriage. Therefore, reason A is correct. By putting herself in danger of becoming pregnant, Joan also wanted to prove to herself that perhaps her parents loved her a little. For if they would protect her at a time of such need, she’d know some measure of security.

Joan must be made to realize that her folks probably did not reject her as much as she might feel. In any case, she is a worth-while person in her own right and need not feel guilty for her hostile emotions, especially since she is somewhat justified in having them. She needs to break off her affair and be helped to grow up emotionally. Only heartbreak awaits Joan should she become pregnant and regress into the state of a dependent child.

This is the first in a series of psychological articles. The facts in this case are events in Joan’s life, and the analysis given apply only to Joan’s particular problem.