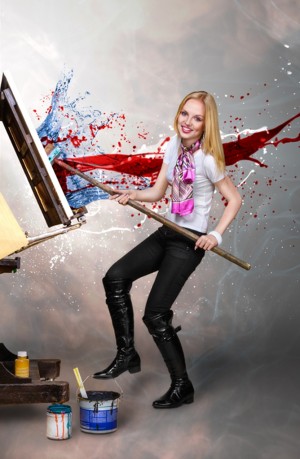 Along with readers across the nation, my book club is discussing The Goldfinch, Donna Tartt’s Pulitzer Prize-winning novel referencing the painting “The Goldfinch” by Carel Fabritius. The fictional tale has sparked new interest in the real painting, and I wonder what Fabritius would make of booming museum gift-store sales of tote bags featuring his trompe l’oeuil portrait of a little pet bird chained to its perch. Tartt’s novel follows the “Dickensian” journey of the protagonist from his boyhood survival of a terrorist explosion in a museum, which killed his mother and left him in secret possession of a famous painting. Like many, I pondered why Tartt chose “The Goldfinch” as the fictionally purloined artwork out of all the other candidates. The painting’s history certainly recommends it as a disaster survivor: It is one of the few surviving works of Fabritius, who was killed at just 32 in a massive gunpowder magazine explosion in 1654 Delft. Fabritius, a master of the 17th century Delft school along with Vermeer and de Hooch, has been praised for painterly illusion and originality, breaking from Rembrandt and Dutch conventions to favor light backgrounds, a cooler palette, delicate light effects and spatial illusion. The chained bird may or may not have symbolic significance: A goldfinch was not only a popular Dutch pet of the time but also a symbol in art for death, resurrection and the passion of Christ. 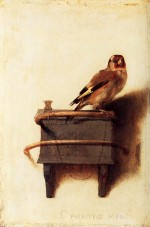 For a good discussion of the work, see the Wall Street Journal article by art historian Mary Lewis. So I can think of many themes from the painting that make it an inspired choice: the trompe l’oeuil of fate and freedom; the soul tethered by a traumatic past, by guilt, by responsibility, by obsession; the fragility and transcendence of art; death and resurrection. The intersection of visual and literary arts can create unique epiphanies, both universal and personal. So, of course, this is not the first work of art to inspire a fictional work. Remember the popularity, if not the prize quality, of Brown’s The Da Vinci Code and Chevalier’s Girl With a Pearl Earring? For some other examples, see http://www.theguardian.com/books/booksblog/2014/jan/17/fine-art-fiction-donna-tartt-goldfinch