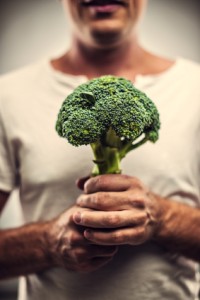 I’m single. I just met someone I like quite a lot. And he likes me. We are compatible on many levels. We both like to travel, to read, and we’re both musicians…we love playing together. I find him intellectually stimulating and sexually attractive. The one stumbling block is that he is a vegan and I am a diehard carnivore. I know this might seem like a trivial thing, but choosing a restaurant is almost impossible. Grocery shopping is a nightmare. He makes me brush my teeth immediately after eating because he says he can smell the meat on my breath. And even though he says he doesn’t care, I know he is judging me. When people ask him about his veganism, he launches into a speech that invariably ends with “most importantly, it is clearly immoral to eat the flesh of our fellow animals.” So, duh, he thinks I am immoral. Lately I’ve taken to eating on the sly, then quickly destroying incriminating evidence via garbage disposal and electric fan…basically acting like a criminal in my own kitchen. I really like the guy, so it breaks my heart, but I don’t know if I can go on like this.

Oh, for goodness sake. Tell your boyfriend to insert two little words into his highfalutin sermon: “For” and “me.” As in, “For me, eating meat is immoral.” End of discussion. Other than that, didn’t your mommy tell you you’re supposed to brush your teeth after every meal anyway? My guess is that as time goes on, your eating habits might start moving toward compatibility, eventually merging at some compromise. You could start eating less meat (it’ll be better for you anyway) and you never know, he might just loosen up his morals. Deep inside he might be a total meat slut. Almost no one is immune to the lure of a steak sizzling on the grill. Filet Mignon is contagious. I can’t tell you how many vegetarians and vegans I’ve witnessed sneaking out for a Big Mac in the dead of night. On the other hand, if you both hold true to your current diets, so what? Just keep your toothbrush handy.