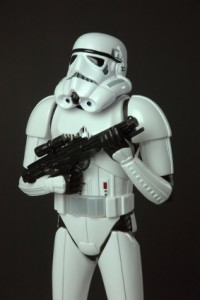 I met a great guy. He is good-looking, intelligent, an accomplished person with a great career. I really like everything about him. Well, almost. He is a Star Wars fan…truly a fanatic. Most guys I know went through this phase, but this dude has experienced no such decline in this childhood obsession. He has a huge collection of Star Wars toys, books, comics, you name it. You know it’s bad when a grown man actually loves Jar Jar Binks. He has a model of Jar Jar on his nightstand, so every time we have sex, that annoying freak stares over at us with that moronic look on his face. Scary. Talk about a buzz kill. The Force is instantly not with me, if you know what I mean. It’s beyond disturbing. He’s also prone to making dumb references and annoying puns. I work at home, so instead of asking, “How’s work?” he says, “How’s it going with your Jabba in your Hutt?” Instead of, “Do you want to come over tonight?” he asks “Obi-Wanna Kenobi?” and worst of all, instead of, “Do you want to make love?” it’s “Hey, Princess, wanna get Leia-ed?” I’m so sick of it. But otherwise, he’s a great guy. I need an outside opinion.

Ready to Skywalk Away

One word: Skyrun! No, I’m sorry, ten words: Skyrun as fast as you can and don’t look back! Look, I’m sure you’re right . . . this nerd undoubtedly has his good qualities. But, holy moley, what’s a girl to R2-D2 with this pre-pubescent fan boy disguised as a grownup? I’ve got nothing against Star Wars per se, except that more than half of the movies are, how do you say? Oh, right, GOD AWFUL. Has he ever even seen a good movie? Has he ever read a book that’s not a lame novelization? I say give him one more chance.Tell him you want to go see some films without special effects or the word “episode” and a number in the title. Also, he needs to invest in a storage unit for the bulk of that memorabilia and declare a permanent moratorium on idiotic space-based puns. If he’s on board with all that, fine. Otherwise, inform him you are travelling to a galaxy far, far away and that, when it comes to sex, as far as you and probably all women in this or any galaxy, real or imagined, is concerned, he’ll likely be relegated to using his Hand Solo.