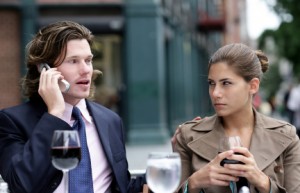 I recently met a guy I really like. He’s smart and sexy and successful. But one thing that drives me completely insane is the fact that he almost always has his smartphone in his

hand. I can get him to put it on the nightstand during actual lovemaking, but other than that he’s super-glued to it day and night——checking scores and stocks and news updates. It’s a turn-off and could spell the end of what would otherwise be a deep and lasting relationship.

I feel your digitally induced pain. I went on a date recently where it seemed like the guy was far more concerned about the number of “likes” he was getting for his tragically unwitty status updates on FaceBook than being liked by the natural-born woman sitting across the restaurant table from him. It’s demoralizing. It’s also a sickness. He couldn’t help himself. He was genuinely distraught when I told him I didn’t want to go on a second date. But I’m sorry, I’m not so desperate that I’m willing to resort to cyborg romance. Yet. I mean I’m sure they’re making incredible strides in sexual-robotics, but, one, I really don’t think the essential moving parts of the perfect man substitute will be a nervous thumb and a sweaty keypad, and two, until it hits the market in all its ever-ready, ever-hard, everlasting glory, I’m sticking with flesh and blood.

But it seems like you like this guy and you’re willing to cut him some slack. You could hide the battery or simply throw the phone out of a moving car, but that might cause bitterness, resentment, and a three-day argument. Which would be counterproductive, to say the least. So, here’s what I suggest. My ex-boyfriend Max was a master of smartphone foreplay. He could turn me on instantly from halfway around the world. I suggest that the next time your man gets all screen-obsessed, you text him something worth getting obsessed about. Photos are good…details of body parts, flashes of flesh. Words are great too…for some, the dirtier the better. As always, though, the erotic is highly subjective. So, whatever you cook up, feel free to add your own personal mixture of heat and spice. A pinch of this…a dash of that. Simmer and stir. I guarantee that soon iGuy will lose all appetite for social networking and be hungry——make that ravenous——for something else.