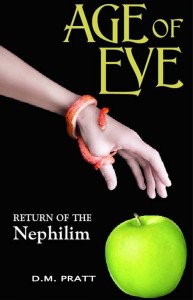 “Look out, vampires—here come the Nephilim.

The popularity of different genres tend to rise and fall in waves, and few have ridden a higher crest recently than vampires. That may change with D.M. Pratt’s “Age of Eve,” which introduces an ancient supernatural being that is probably new to most readers.

You don’t have to know the backstory to Nephilim to be drawn into this page-turner. All you need to know is that they are mentioned a couple of times in the Bible, and that they pre-date human existence on Earth.

What makes Pratt’s novel work, however, is not the Nephilim, but the way she incorporates them into a carefully constructed mystery thriller.

As the title suggests, it’s all about Eve, a magazine writer living in modern day New Orleans. She lives an unextraordinary life. She’s unmarried, and her best friend Cora is a “trust fund baby” with lots of free time and money.

Eve’s life gets significantly more interesting when she’s assigned to cover a party for her magazine. An unexpected encounter with a handsome stranger turns into what appears to be a one night stand.

But that’s just the beginning of a journey that will take her through the world of Cajun voodoo, intriguing family secrets and, of course, Nephilim.

Pratt measures each element so the book never leans too heavily on one aspect. In fact, Age of Eve is at its heart a solid mystery.

Pratt’s strongest attribute is the use of incredible detail, whether it’s the description of the mansion that plays a central role in the story, or even one of the several romantic scenes.

Almost all of the plot twists are a surprise, but none of them feel forced. Instead, they help ratchet up the intensity while keeping you guessing how it could end.

Creating a book for a series is not easy because the story must be able to stand alone while also laying the groundwork for other adventures to come. If Pratt stopped at “Age of Eve,” the reader could be completely satisfied. Fortunately, Pratt has left the door open for readers to be seduced by the next installment. With any luck, soon the Nephilim will be the new vampire.”

“I loved it!! D.M. Pratt did a wonderful job bringing the feeling of New Orleans to life in this book.  Her writing was so descriptive that I could close my eyes and right away I was there in the story right next to Eve.  Pratt had me hooked from the beginning. I was so intrigued with who this mystery man was that put Eve’s head into a spin that I stayed up all night!!  Pratt is great at building suspense and the ending was definitely a surprise. I did not want it to end. I can’t wait until the next two books come out.  I’ll be looking out for them.”

I have to say that the sex scenes REALLY WORKED. I was so pleasantly surprised that it really added an edge and momentum to the story line . . . This book contains sex, magic, mystery, fallen angels, southern America, love and a race against time to save the person you love AND yourself then you really need to read this book!  I GIVE THIS BOOK A 5/5 STAR! IT’S A MUST READ AND A BOOK YOU SHOULD ALL HAVE ON YOUR SHELEVES. – BenjaminofTomes.blogspot.com

AGE OF EVE reads fast, it paints vivid pictures, it engages the reader’s emotions and passions, it draws you in to a very unique intrigue and it goes places you don’t quite expect . . .  the book is billed as a romantic thriller — It is very romantic and it is very thrilling, delivering wholeheartedly everything is says on the tin! – Spacehunter, Amazon

“This book contains sex, magic, mystery, fallen angels, southern America, love and a race against time to save the person you love AND yourself…you really need to read this book! I GIVE THIS BOOK A 5/5 STAR! IT’S A MUST READ AND A BOOK YOU SHOULD ALL HAVE ON YOUR SHELVES.”

“I’ve grown totally tired of vampires, ghosts, and witches, so it’s nice to see that someone has come up with something new. Actually, it’s something as old as time itself. If you don’t know, Nephilim are creatures mentioned in the bible that existed before humans. But they’re still around, wreaking havoc. I love that the main character has to battle these Nephilim, not only for her survival, but to save the whole world. The high stakes makes it super exciting. I can’t believe this is the first book I’ve read in the genre that involves Nephilim—to me, they have way more possibilities than vampires, literary-wise. Let’s hope this is a trend.”

“Inventive and lush with a captivating storyline ripe with biblical archeology and metaphysical layers that carries you straight to end and has you waiting for the next tale.”

“Oh my gosh. What the actual hell was this.? And I mean this in a good way. I’m sitting here completely shocked and amazed at just how much I grew to enjoy this story, the plot twists, the history, the everything.  I can’t wait for the next book since the ending was absolutely crazy! The writing style reminded me of The Night Circus. Really beautifully descriptive . . .  stick with it to the end. It would just absolutely blow your mind.  I’m itching for book 2, and when it’s complete I’d want to buy it for my bookshelf.”