Author D.M. Pratt was recently interviewed by AllRomance.com for her new novel, THE TEMPTING, which is on sale now at all book retailers. THE TEMPTING is the story of reporter Eve Dowling, who falls in love with the handsome and seemingly perfect Beau Le Masters. After a night of passionate love-making, Eve hits her head, falls into a coma, and wakes up 13 months later to discover that she has had a son, and that Beau has stayed by her side the entire time. When she agrees to marry Beau, it looks like her life will have its “happily-ever-after” ending, but soon her nightmares are telling her a different story. Is Beau one of the fallen sons of god – a Nephilim — or is he the man she fell in love with?

Here is what Ms. Pratt had to say her life, writing and THE TEMPTING:

AllRomance.com: Who is D.M. Pratt and when did the dream of being a writer begin?

D.M.: I am a story teller. I have always been a story teller. When I was very young, I would retell my dreams from the night before to my friends when we came out to play. And those rather fantastic dreams were always embellished stories by the end of the day. I started writing poetry at about 13 when I was moved by an event or a person and found it was the only way to express my feelings.

I picked up the guitar at 18 and my poems became songs. I loved performing in front of live audiences. So naturally, I became an actress and loved the exploration of self that comes with building characters.

In my twenties, however, I found that the roles offered to women did not reflect who I was or how I felt about being a young woman, so I yearned to write for myself. I had my first opportunity when doing a film called “Adventures in the Forbidden Zone.” I was hired for the role of Megan, leader of the Earth girls. After the original director was fired and the script tossed out, my brave, strong female role with great dialogue had completely vanished, along with two other dynamic Earth girl characters. So I snuck into the writers’ room and wrote a three-page scene explaining who the Earth girls were and why we were the driving force behind the film – without us, no hero or villain had any reason for being. My efforts were accepted but only resulted in a half page scene. It constituted the only dialogue my character got to say, but it started a fire in me to be a writer that has never died.

I decided to move to Hollywood because it was a pathway to my dreams; I could write and then act the characters I was creating. As an actress I would work on TV shows and whenever I was a regular or recurring character, I would talk to the writers and the producers about writing a script. I would write and they would guide me. I am a very visual writer. My first filmed teleplay took 7 rewrites, but I loved the process. It became an episode of “Airwolf” called “Fallen Angel.” That’s where it started and from there I was unstoppable.

AllRomance.com: The Tempting: Seducing the Nephilim is your newest release; can you give us a little information about this story?

D.M.: It’s an emotional story of love threatened by creatures first described in ancient texts as the Nephilim or “fallen Sons of God.” Our heroine, Eve knew the moment she saw Beau she was his – it was love at first sight. A romantic night dancing sensually with a seriously handsome stranger leads to the greatest seduction of her life, a moment of wild erotic, sexual passion and an orgasm so intense Eve hits her head hard enough to give herself a concussion, which results in a coma. Eve awakens from her “Sleeping Beauty” coma and is greeted by the powerfully seductive and handsome man with whom she had danced and fallen in love. To her shock and pleasant surprise, he stayed by her side, protecting her and their new born son. Once home, Eve is plagued by nightmares of being ravaged by an exotic creature, known as a Nephilim that she comes to believe is the man-of-her-dreams. Eve has to find the courage to save herself, her son and discover who she really is and why the Nephilim are drawn to her.

AllRomance.com: How would you describe your lead character?

AllRomance.com: How did you come up with this story and what is your favorite thing about writing it?

D.M.: I originally wanted to do some light and fun writing, especially after seven years of creating and writing a huge futuristic, epic adventure, drenched in science fiction and science fantasy. I started writing The Tempting simply with the idea of creating a fun, strong woman lead character. But then the book became a mystery, then a thriller. THEN, the Nephilim appeared and from that day forward the book was possessed. I was just the fingers on the keyboard as the story played out in my mind so vivid and so complete there were days I felt like I was watching a movie.

AllRomance.com: What do you do when you aren’t writing? Any hobbies or special interests that you can tell us about?

D.M.: When I’m on a writing jag — I write. I like disappearing from the world, responsibilities and people. Doing research – I can get lost in historical, science and topic-related books for days, looking into a subject. Getting close to nature helps me think. I love long walks with great views of the mountains that fall into distant valleys or hiking along the edge of a cliff overlooking the ocean with vast vistas. These grand views allow my mind and imagination to expand and be creative. Massages and yoga and conversations with close friends whom I share where my mind, characters, stories and muses are taking me. I also love to travel and discover new places. Long journeys inspire me to write.

AllRomance.com: What do you think readers will love about this story? Is there something specific you hope readers take with them and/or feel after they finish reading your books?

D.M.: Great story. Smart and fun characters. Great thriller that twists and turns and keeps you captivated. Feminine empowerment and… as one friend said, “best sex she’s had in years.”

AllRomance.com: If you weren’t writing romance, what would you be writing?

D.M.: Anything that inspires me. I never limit myself. I love the present, the past and the future. There is romance in all good story telling along with strong, fascinating characters, interesting places and profound, internal and external conflict.

AllRomance.com: Happy New Year! Can you share with us one of your New Years Resolutions and what can we expect from you in the year to come?

D.M.: My resolutions. Love more. Give time to something worthy. Be outside more with nature. Smile and laugh at least once a day. Trust my gut. Forgive myself, the past and let it go! Sing more. Dance more. Play more. Breathe deeply and trust ME. I would enjoy the opportunity to direct a film this year and maybe even write another book!

Recently Ms Pratt was interviewed by Reina Menasche, host of East County Magazine Show’s Bookshelf, and you can listen to her podcast HERE 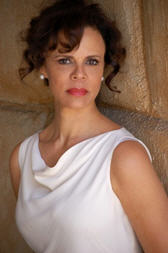 Ms. Pratt is a five-time Emmy nominee, a Golden Globe nominee and was chosen for the Top Ten short list for the Academy Awards for her live action short film Girlfriends. She has received the Lillian Gish Award from Women in Film, The Angel Award, The Golden Block Award, and six B.E.N. Awards. As Co-Executive Producer and Head Writer for the ground-breaking television series Quantum Leap. Ms. Pratt wrote 25 episodes and co-wrote an additional 15 episodes and has produced over 100 hours of network programs. She made her directorial debut on Cora Unashamed for the BBC’s Masterpiece Theatre’s The American Collection, which aired on both PBS and the BBC. Check out her other interview, D.M. Pratt: The Quest of a Writer and her other novel, Age of Eve