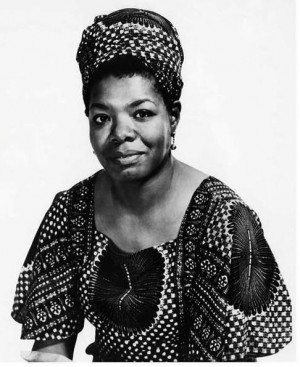 Maya Angelou always had something to say–but it wasn’t always through spoken word. She stopped speaking as a small child for over a year after an incident with her mother’s boyfriend. The incident transformed her emotions into focused thought and she began writing down everything that inspired her, scared her and moved her. Her efforts resulted in the enormously successful 1969 memoir about her childhood and young adult years, I Know Why the Caged Bird Sings, which made literary history as the first non-fiction bestseller by an African-American woman. The poignant work also made Angelou an international star. Since publishing Caged Bird, Angelou has continued to break new ground—not just artistically, but educationally and socially. She wrote the drama Georgia, Georgia in 1972—becoming the first African-American woman to have her screenplay produced—and went on to earn a Tony Award nomination for her role in the play Look Away (1973) and an Emmy Award nomination for her work on the television miniseries Roots (1977), among other honors.

One of Angelou’s most famous works is the poem “On the Pulse of Morning,” which she wrote especially for and recited at President Bill Clinton’s inaugural ceremony in January 1993—marking the first inaugural recitation since 1961, when Robert Frost delivered his poem “The Gift Outright” at President John F. Kennedy’s inauguration. Angelou went on to win a Grammy Award (best spoken word album) for the audio version of the poem.

In 1995, Angelou was lauded for remaining on The New York Times‘ paperback non-fiction bestseller list for two years—the longest-running record in the chart’s history.

Angelou was a good friend of TV personality Oprah Winfrey. Winfrey, organized several birthday celebrations for the award-winning author, including a week-long cruise for her 70th birthday in 1998.

After experiencing health issues for a number of years, Maya Angelou died on May 28, 2014, at her home in Winston-Salem, North Carolina. The news of her passing spread quickly on the national news and social media circuits. Singer Mary J. Blige and politician Cory Booker were among those who tweeted their favorite quotes by her in tribute. President Barack Obama also issued a statement about Angelou, calling her “a brilliant writer, a fierce friend, and a truly phenomenal woman.” Angelou “had the ability to remind us that we are all God’s children; that we all have something to offer,” he wrote.

Some of our favorite words of wisdom from Maya Angelou include: