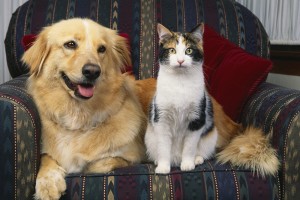 Many author promotional photos include pets, as I noticed when researching my prior post about author portraits. I suppose it is partly a ploy to make the writer more appealing; you can’t be a selfish, irresponsible brute if you love a pet, right? And pet-owning is a common social connector – to the point that I see more sharing of photos of pets than human partners. But assuming authors also picture pets because they are important in their lives, I wondered if the choice of pet (meaning cat versus dog) has any psychological significance. Yes, studies have shown that dog lovers, reflecting their social pets, are generally more extroverted and confident, as well as more conventional, while cat lovers are generally more introverted but also more open, meaning more likely to embrace unusual ideas, artistic creativity and a variety of experiences. Since I’m a cat person, I was naturally curious about writers who have been inspired by felines. A very partial list includes Mark Twain, Jean Cocteau, Stephen King, Jean Paul Sartre, Jack Kerouac, Ernest Hemingway, Edgar Allan Poe, Colette, Samuel Johnson, Raymond Chandler, Tennessee Williams and Joyce Carol Oates. Of course, creative writing has a canine contingent. Famous dog-owning authors include Virginia Woolf, John Steinbeck and William Faulkner. I’m not sure what it says about the personalities of authors fond of unusual pets — such as Charles Dickens with his raven or Beatrix Potter with her rabbit. But for some aah-inspiring photos of famous writers and their pets, go to http://flavorwire.com/350238/adorable-pictures-of-famous-writers-and-their-pets/