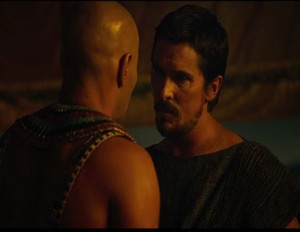 From Batman to Moses, Christian Bale has played his share of iconic men. In the Ridley Scott’s Old Testament epic Exodus: Gods and Kings, Bale takes on the role of the sea-splitting Moses, a role made famous by Charlton Heston in The Ten Commandments. Scott’s all-star film tells the story of Moses leading the Israelites out of slavery in Egypt, then under rule of the Pharaoh Ramses, played by an almost unrecognizable Joel Edgerton. Ben Kingsley, Sigourney Weaver, John Turturro and Breaking Bad’s Aaron Paul are among the other actors who signed on to bring the ancient tale to life, shooting in the exotic locations of Almería, Spain, and Fuerteventura in the Canary Islands.

“The biblical account of Moses is extraordinary, and there was lots of room for us to go to places that The Ten Commandments never dreamed of going,” the Oscar-winning actor told Entertainment Weekly.

Exodus: Gods and Kings continues the Biblical-epic trend that’s been sweeping theaters all year, beginning with Son of God in February andNoah in March. Exodus opens in theaters on Dec. 12.

Watch the trailer below: