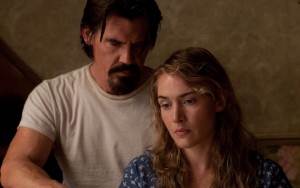 With the end of summer closing in and a steamy Labor Day weekend looming in the town of Holton Mills, New Hampshire, thirteen-year-old Henryâ€”lonely, friendless, not too good at sportsâ€”spends most of his time watching television, reading, and daydreaming about the soft skin and budding bodies of his female classmates.

But all that changes on the Thursday before Labor Day, when a mysterious bleeding man named Frank approaches Henry and asks for a hand. Over the next five days, Henry will learn some of life’s most valuable lessons: how to throw a baseball, the secret to perfect piecrust, the breathless pain of jealousy, the power of betrayal, and the importance of putting othersâ€”especially those we loveâ€”above ourselves. And the knowledge that real love is worth waiting for.

Jason Reitman has taken the director reins and adapted the novel into a feature film. Â Josh Brolin and Kate Winslet have been given the lead roles and the results have been positive so farâ€”with Winslet having been nominated for a Golden Globe.

In a manner evoking Ian McEwan’s Atonement and Nick Hornby’s About a Boy, acclaimed author Joyce Maynard weaves a beautiful, poignant tale of love, sex, adolescence, and devastating treachery as seen through the eyes of a young teenage boyâ€”and the man he later becomesâ€”looking back at an unexpected encounter that begins one single long, hot, life-altering weekend.–GoodReads

Youâ€™ll Get a FREE Ebook PLUS the TruLOVE Newsletter

BroadLitĂ‚Â® combineĂ˘â‚¬â„˘s the popular genre of romance with the emerging world of new media technology and delivers to todayĂ˘â‚¬â„˘s women romance through its many multi-media channels. TruLOVEstories.com is specifically designed for women looking for a little romance seasoned with humor. The site offers novels, love stories, games, merchandise, contests, videos and other opportunities for building a strong community.

BroadLit is unique in that it brings to the market a combination of classic and new romance materialĂ˘â‚¬â€ťRomance Stories, love stories, romance books, romance eBooks -- in a variety of ways. In addition to bringing back to life the assets of True Romance and True Love Magazines in its TruLOVE Collection series, it is also publishing original contemporary romance novels. BroadLit, Inc. is a Los Angeles based company launched by the owners of Broadthink, a boutique branding and new business development media company.