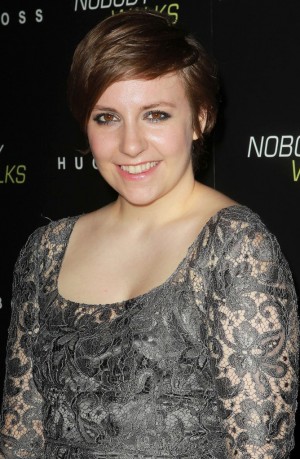 Lena Dunham is a household name now that her comedy TV show Girls (in its third season on HBO) is a glorified hit. The show follows a group of girls in their twenties trying to make it in New York City and is filled with the often painstakingly accurate high highs and low lows that accompany post-collegiate life.  Dunham’s character, the slightly neurotic, often confused, but completely lovable Hannah Horvath is a young writer—loosely based on Lena’s real life—though nowhere as successful as Dunham has proven herself to be.

Born in Manhattan to two artist parents who had made a name for themselves in the New York City art scene, Lena Dunham was no stranger to creative expression growing up.   She attended Oberlin College where she studied creative writing, finding her place writing short films.   After graduation she continued her passion by writing and directing the web series Delusion Downtown Divas that followed the lives of three girls raised by the New York art scene.  It was her next project, the 2010 short film Tiny Furniture that Dunham wrote, directed, produced, and starred in, that lead her to breakout success—it ended up winning that year’s Best Narrative Feature Award at the South by Southwest Film Festival in Austin, Texas.  Dunham completed the project in only 18 days and on a tight $45,000 budget.

It was this short that lead Dunham to HBO after her series Girls was backed by an impressed Judd Apatow (producer of films such as Bridesmaids and Knocked-Up). Together they embarked to create a show depicting the lives of not-quite-yet-women that by the end of its first season had been nominated for four Emmy awards, a Critic’s Choice award, and a Satellite award, and broke boundaries when Dunham became the first woman to win Outstanding Directing in a Comedy Series by the Director’s Guild of America.  The show has since won two Golden Globe awards for Best Series and Best Actress.

As the success of Girls continues, Dunham can be found guest hosting Saturday Night Live, providing her voice for the cartoon Adventure Time, dating Jack Antonoff — lead singer of the band Fun., and she has also signed a deal with Random House to release a book of her essays called Not That Kind of Girl: A Young Woman Tells You What She’s Learned.  This will be available in early October, 2014.

Lena Dunham has been a passionate advocate for LGBTQ rights, vowing not to be married until it is legal for all. In April, 2014 she will be presented the Horizon Award by the Point Foundation, the National LGBTQ Scholarship Fund, for being “a young trailblazer who has taken a leadership role as an advocate of the LGBTQ community showing unwavering support.”  CEO of Point Foundation, Jorge Valencia, went on to say, “Thanks to Dunham and HBO, millions of young people today feel validated by seeing poignant reflections of their own lives on each episode of Girls.”

Visit the Point Foundation at http://www.pointfoundation.org/ to learn about scholarship opportunities, donations, and other ways to support the organization and cause.