From The How I Know I’m In Love Series 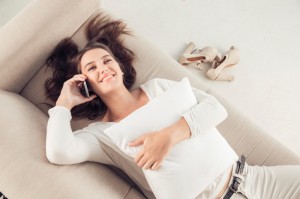 The first and only time I ever fell in love was when I met Dennis, but the strange thing about it was that I didn’t meet him face to face. I fell in love with his voice as we talked on the phone one night.

It all started when he called a wrong number and asked for someone with the same name as mine. When I answered the phone, he asked for Diane, and since that’s who I am, I said, “Hi!” I thought he was a friend of mine. We started to talk — without even knowing who we were really talking to!

We’d been speaking for a few minutes when he said something that I didn’t understand, and when I asked him about it, he suddenly realized that I wasn’t the Diane he knew. When he realized what had happened, we both laughed and he told me he was glad it had happened because he thought I had a nice voice and liked me already. I told him that I felt the same way, and he began to call every day after that for almost a week.

We finally met, and when we did, I knew that I loved him even more than I loved his voice. I could tell that he felt the same way.

Dennis and I have been dating for three years now, and we plan to get married someday. I never thought that I’d fall in love by talking to a stranger on the phone, but now that it’s happened, I couldn’t be happier. That’s how I know I’m in love.

Submitted by Diane from Nashville, TN
Previous submissions can be found here on How I Know I’m In Love

How do you know that this crazy, wonderful feeling is the real thing? Share your experience with others. Tell us in 300 words or less. Send your submissions to trulovebooks@gmail.com and we’ll go over each submission. If we select yours, we’ll feature right here on our site and we’ll send you a free romance e-book!