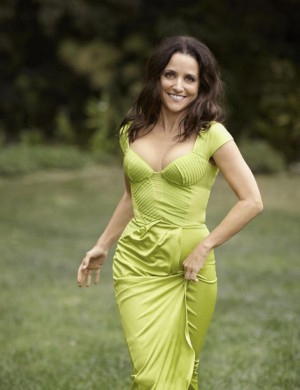 Julia Louis-Dreyfuss has been nominated for 16 Emmy Awards for shows like Seinfeld, The New Adventures of Old Christine, and most recently, Veep.  She has won the award for Best Actress at least once for each show, making her one of the most nominated comedic actresses of all time.  Coming out of The Practical Theater Company in Chicago, Dreyfuss was cast in Saturday Night Live in 1982. She stayed with the group for three years proving her skills as an entertainer and creator of lovable characters. Four years later she landed the role of Elaine on NBC’s Seinfeld. For 9 years Dreyfuss and the rest of the Seinfeld cast enamored both critics and audiences, upping the standard for sitcoms.  Parting with her iconic role, Dreyfuss appeared in films, was a voice in the animated picture A Bug’s Life, and had a reoccurring part on Curb Your Enthusiasm.   After a few years of random projects, Dreyfuss gained the title role in The New Adventures of Old Christine in 2005 pm CBS. The show was hugely successful and reinforced Dreyfuss as a staple in the entertainment world. After five seasons, it came to an end, and quickly Dreyfuss was named the lead in Veep, her current television project on HBO.  She plays Vice President Selina Meyer and has been called the “most magnetic and naturally funny woman on TV since Mary Tyler Moore” by the Huffington Post, and don’t we agree!

Julia Louis Dreyfuss works closely with environmental projects and charities.  She helped fight for Proposition O to pass which gave millions of dollars to clean up the Los Angeles water supply.  She has also raised money for the Trust for Public Land, the Natural Resources Defense Council, and Heal the Bay.  This year, she was able to raise $11,000 for Heal the Bay through the ‘Toast for a Cause’ initiative by champagne maker Moet & Chandon. Every year Moet & Chandon helps celebrities raise money for charitable causes, and this year offered an extra $10,000 to the celebrity who could get the most response and reaction on twitter to a ‘Toast for a Cause’ tweet.  Dreyfuss’ fans came out in full support, and she was awarded the extra money to give to Heal the Bay.

Visit Heal the Bay at http://www.healthebay.org/

The Fourth Season of Veep has now started on HBO