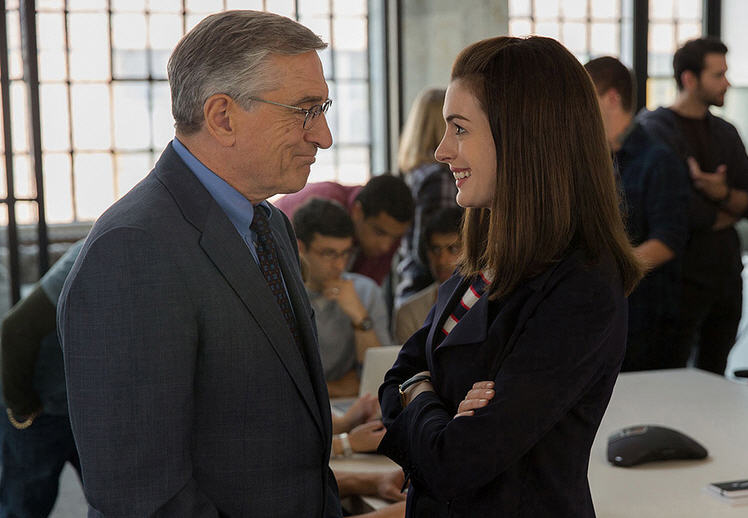 Funny, smart, warm, wise and completely winning comedies actually aimed at grown-ups don’t come around often from the major studios these days, but thank God for Nancy Meyers, the writer/director/producer of The Intern, who works within the system and consistently comes up with a winning formula in this genre.

With the infectiously likable The Intern, it’s not romance at the center but rather an inventive spin on a workplace comedy.Robert De Niro, as good as he has ever been in this genre, plays Ben, a 70-year-old retired widower who is sick of the new routine in his life and answers an ad for a senior internship at one of those e-commerce clothing companies. As founder/owner Jules Ostin’s top lieutenant (played nicely by Book Of Mormon’s Andrew Rannells) says, “wouldn’t you rather have someone with all this experience than someone who has played Beer Pong for the past four years?” It’s an innovative idea and, much to the reluctance of Jules (a terrific Anne Hathaway), Ben is assigned to her office.

As the film moves along  it becomes clear that Ben has much to offer and vice-versa despite the generation gap between them. Meyers knows her way around a comic line and there are lots of gems here. Of course, this set-up with a retired senior who once worked at a phone book company and now finds himself smack in the middle of a facebook-driven cyber world is irresistible.

I loved the supporting cast of the young interns which includes Zack Pearlman and Jason Orley (who actually was an intern for Meyers on It’s Complicated and had never before acted until she convinced him to audition for this). Then there is the sublime and warm presence of Rene Russo as the in-house masseuse who actually does strike up a nice possible romantic pairing with De Niro. For a first date he takes her to one of the seemingly weekly funerals of old friends. Of course along the way there are complications that arrive, including in Jules’ personal life with her stay-at-home husband and daughter, but this film never goes to the cliche that a top businesswoman can’t have it all.  It just never really comes up and that’s refreshing.

The Intern is a genuine crowd pleaser in every way.  The pairing of De Niro and Hathaway is inspired and the film says a lot about living your life to the fullest, no matter what your age. Warner Bros. releases the movie wide on Friday, September 25th.