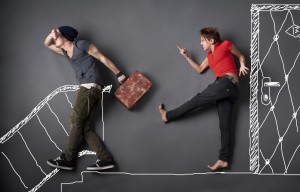 In adult gatherings, the demise of a marriage or long-term romantic relationship is a common topic. There may be revelations about physical abuse, affairs and addictions. However, sometimes, like the murderer in the news whom everyone describes as a “good son” or a “great neighbor,” these relationship deaths take people by surprise.

Do doomed relationships really leave so few clues? Of course not. We just aren’t paying close attention to other people’s interactions–or at least not paying attention to what counts. According to famed marriage researcher John Gottman, who has won TV news and talk-show appearances, numerous print articles, and even a chapter in Malcolm Gladwell’s best-seller Blink, there are four markers of relationship failure that are highly predictive of divorce (94%): criticism, defensiveness, contempt and stonewalling.

Conflict is natural and even healthy in relationships; it is the unhealthy ways of dealing with conflict that cause problems, per Gottman. So, if couples consistently resort to criticism (attacks on personality or character), defensiveness (shifting blame or responsibility), contempt (expressions of disrespect and superiority) or stonewalling (a refusal to listen or discuss), long-term togetherness is in jeopardy. From other experts come these observable clues to a relationship unlikely to last: a coupling of extreme opposites (who may attract short-term but eventually repel over insoluble differences); a control freak partner jealous of anyone or anything outside of the relationship; unkind or verbally abusive behavior; and a demand or expectation of change in a partner’s authentic self.

Wondering about the health of your relationship? Try this little quiz: http://psychcentral.com/quizzes/relationship_quiz.htm