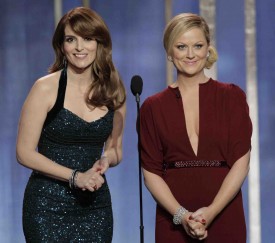 Tina Fey and Amy Poehler have closed deals to host the next two Golden Globe Awards, starting with the January 12, 2014 ceremony. Fey and Poehler were approached about coming back over the summer, following the duo’s very successful first Golden Globes turn this year, which drew warm critical reception and big ratings. Fey and Poehler solidified their status as TV’s hottest comedy act last month with their scene-stealing bit at the Primetime Emmys, which became the highlight of the show’s opening. Unlike Ricky Gervais’ original Golden Globes hosting deal, which had an option for a second year,

Fey and Poehler had agreed to host the 2013 ceremony as a one-time thing with no obligation to come back. But given their success, it was no surprise that NBC, Golden Globes producer Dick Clark Prods and the Hollywood Foreign Press Association wanted to get them back. The Fey/Poehler-hosted January ceremony drew 19.7 million viewers, up 17% from last year and one of the most watched Globes ever. In the key adults 18-49 demo, the show posted a 6.4 rating, up 28% from 2012. “Tina and Amy are two of the most talented comedic writer/performers in our business and they were a major reason the Golden Globes was the most entertaining awards show of last season,” said NBC’s alternative programming president Paul Telegdy. “We’re elated they wanted to host together again and that they committed for the next two years.”

Both Fey and Poehler have impeccable live show credentials as Saturday Night Live veterans who both have returned to host the venerable late-night show — including hosting SNL season premieres (most recently Fey last month). “Tina and Amy have a truly unique chemistry making them one of the most talented and captivating pairings of all time,” said DCP CEO Allen Shapiro. The two are able to fit the Globes into their busy schedules because of the show’s nature that doesn’t require months-long host preparation the way the Oscars do. “I can’t stress enough how little we will prepare until very close to the show,” Poehler told the HFPA. “We’ll treat it like Weekend Update — it’s a little SNL style and have to work backwards. We get a lot of jokes, write our own, talk bits and we work through them. You can’t really do this kind of stuff too early and you can’t over think it.” 30 Rock creator Fey, in the first season under a mega four-year deal at Universal TV, is working on two high-profile comedy projects with a last-minute third sale a possibility. Poehler is the star-producer of NBC’s Parks And Recreation, and the two also have active movie careers. Poehler, who is working on her first book, will next be heard in the upcoming animated comedy Free Birdsand seen in You Are Here. Here is a highlight reel of  Fey and Poehler’s first Golden Globe hosting stint as well as their Emmy bit: