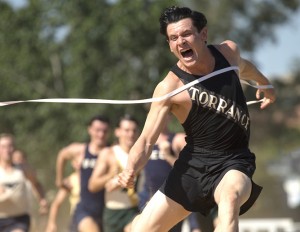 Louis Zamperini passed away at the age of 97 last week, and nobody deserves peace more than him. Sadly, he will not be around to see the story of his life as told through the film adaptation of the Lauren Hillenbrand biography, Unbroken. Director Angeline Jolie became close with Zamperini during the filming of the movie, and she undoubtedly was able to show him some footage before he passed away. Zamperini’s story of survival is almost too unbelievable to be true, but it was recounted with incredibly accuracy.

Read Who They Cast To Play The Bird

Zamperini was a star athlete as a young man growing up in Torrance, CA., and at the University of Southern California. Known for his finishing kick, he set the national high school record in the mile, setting a 4-minute, 21.2-second mark that stood for 20 years, at the Los Angeles Memorial Coliseum in 1934. In the 5,000-meter Olympic trials two years later, he qualified by finishing in a dead heat with the world-record holder, Don Lash. With the 1940 Olympics in Tokyo canceled, war intervened on his athletic career and his experiences in the Pacific, as described in Hillenbrand’s book, were harrowing. 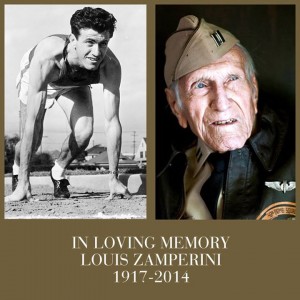 He enlisted in the Army before Pearl Harbor and was a bombardier on a U.S. Army Air Forces bomber that crashed into the ocean. He and another survivor drifted on a raft in shark-infested waters for 47 days, only to captured by the Japanese. He was tortured as a prison of war for more than two years. Although he sank into alcoholism after the war, he turned his life around with a religious reawakening at a Billy Graham revival. When he met his war-time tormenters decades later, he hugged them.

The first trailer for the film, which is set for a Christmas 2014 release, is shown below.