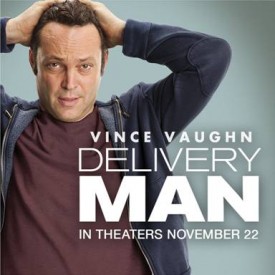 Hoping to gain some traction not only at the box office but also this awards season, DreamWorks and Disney unveiled their holiday comedy Delivery Man on Sunday night at the El Capitan in Hollywood. And judging from audience reaction (which included several members of the Hollywood Foreign Press Association), star Vince Vaughn could find himself in the running for a Golden Globe as Lead Actor in a Musical or Comedy. It’s a career-best change-of-pace role for him as this is a rare studio comedy — or “dramedy,” or he puts it — that’s full of heart and poignant moments mixed with the laughs. Vaughn plays a meat truck driver who unknowingly fathered 533 kids thanks to endless sperm bank donations he made in the early ’90s to earn cash to pay off debts. Now about 150 of them have filed a class action to try to determine the true identity of the biological father they know only as Starbuck. It is based on writer-director Ken Scott’s 2011 Canadian film Starbuck. Scott helmed the American version as well.

DreamWorks CEO Stacey Snider and Disney Chair Alan Horn were among those gauging reaction to the November 22 release, which goes head to head that day against juggernaut sequel The Hunger Games: Catching Fire. Snider told me she hopes to get those wanting something different as well as the overflow from that one, but Delivery Man seems poised as smart alternative programming over the Thanksgiving period and not directly aimed at the same audience as those Games. She’s still digesting the complete audience rejection of DreamWorks’ other fall release, The Fifth Estate. (“It’s clear now no one really cared about seeing a Julian Assange movie whatever its merits,” she told me.) Obviously she’s hoping for different results from this one, which should please Vaughn’s fans and also features a terrific supporting turn from a hilarious Chris Pratt as his befuddled lawyer.

Vaughn liked the experience so much that he is shooting a second film with Scott called The Business Trip and told me at the Hard Rock Cafe post-party that Delivery Man was a special project for him. “If you’re an actor and you’re fortunate enough to have a filmmaker and storyteller that has great taste and real passion, and on top of it doing something original, that’s terrific,” he said. “[Scott] was really passionate about telling the story again. For me, I think I am right in the target audience being a new dad and in kind of a non-polite, unpredictable way you really get to explore a lot of the hopes and fears you have for your kids. There’s so much in this movie that is sort of very intimate and relatable, even though it is kind of a crazy concept. It’s great as an actor where you get to do all these different types of things in one film. There were scenes were your heart’s broken, scenes where you’re frustrated, and then just straight-up comedy. It was great to be in that.”

Scott told me he needed an actor who was able to carry the story but also was great in comedy, and Vince filled the bill. As for having the unique experience of being able to tell this story twice in the span of just a couple of years, Scott says he isn’t playing favorites between Starbuck and Delivery Man. “Obviously for me it’s very hard to compare the two movies,” he said. “It’s like comparing two kids. Which one is my favorite? I can’t say, but I am very proud of this one.”

By Pete Hammond at Deadline.com