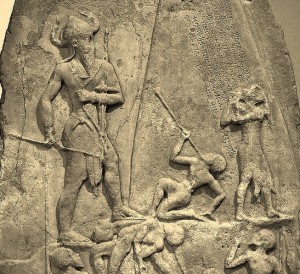 The Bible speaks of a race of giants who roamed the Earth before the great flood of Noah’s day. The Bible tells of these Nephilim, revealing that these were the offspring of angels, essentially becoming demigods to the Earth’s population during the time of Noah:

The Nephilim were in the earth in those days, and also after that, when God’s sons came in to men’s daughters. They bore children to them. Those were the mighty men who were of old, men of renown.

Did Angels Have Sexual Relations With Human Women?

The offspring from an illicit union between the “fallen angels” and human women were giants who“became mighty men which were of old, men of renown.” (Genesis 6) The fact that they were giants, is also proof in and of itself that their parentage was superhuman. But these giants were evil. Having been born of corrupted, Satanic angels they dominated the Earth and filled it with violence. It is also interesting to note that the Bible calls them “men of renown.” The Hebrew word here, shem, refers to being famous and legendary. It is as if the Bible is indicating that when the reader hears of legends of “demigods”, titans or legendary heroes who were part god, that this is who those “myths” were referring to. These were ‘men’ of superhuman ability and strength. In addition to causing violence and sin in the world, the Nephilim were also corrupting the human bloodline.

References to the Nephilim have shown up on various film and television programs for years.

In season 5 of The X-Files entitled All Souls, Dana Scully attempts to save three Nephilim who appear as young girls with several genetic deformations.

In the 2004 British TV series Hex, the main antagonist, Azazeal, is part of the Nephilim and can only show his true demonic form when gaining strength through performing ritual sacrifices with willing participants.

In the 2014 film Noah, the Nephilim are angels originally entrusted to keep watch over Adam and Eve. After they are expelled from the Garden of Eden, they follow humanity out of sympathy and are fallen due to having disobeyed God, their original bodies of light are driven into the Earth’s crust and they are transformed into stone giants, known as the Watchers. However upon redeeming themselves by defending Noah’s ark they are released from their stone giant forms and become angels once again.