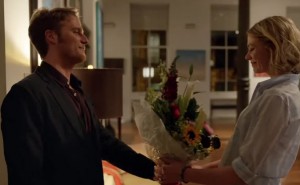 Have you ever wondered what your date was thinking?  This romantic comedy exposes the differences between men and women through the unfiltered thoughts, and often contradictory actions, of a new couple who have just begun dating. It’s a typical boy-meets-girl tale, but there’s a twist: you can hear their thoughts. So as they’re spouting pleasantries on screen, you know they’re secretly judging each other — super hard. The show features Jake McDorman (Shameless, Greek) and Analeigh Tipton (Hung, America’s Next Top Model) as the cute couple. One critic suggested, like he meant it to sting, that the pilot was a little too Woody Allen, circa his Manhattan period, right down to the series’ name. “I’m not trying to rip it off,” creator Jeff Lowell said, as the critic ticked off the similarities. “I’m a fan. It’s there, but hopefully not so directly that it seems opportunistic.”

ABC has Manhattan Love Story set to air on Tuesday nights at 8:30 p.m., starting this fall. You can watch the trailer here: