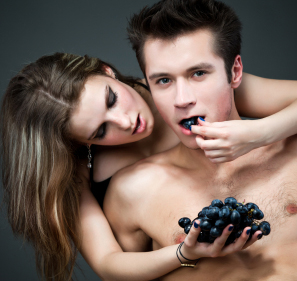 My boyfriend has gone nuts with the whole food and sex thing. He started out with the typical stuff: whipped cream, strawberries, bananas, etc. And I liked it for a while, but now it seems like he sees it as a prerequisite, the one and only starting point for sex…like he’s just not interested in me if I’m not slathered in cream cheese or chocolate syrup. The worst was tomato soup. I mean, come on. And I’m always the one who has to clean up. Newsflash: the oil from almond butter does not come out of an oriental rug. But more importantly, I find myself yearning for the taste of unadulterated flesh. Call me crazy, but I find skin au naturel plenty stimulating. Last night he arrived in the bedroom with the biggest olive oil-drenched carrot I’ve ever seen. I was able to divert his attention, thereby avoiding this assault by root vegetable, but I know he hasn’t given up on the idea. On our last trip to Whole Foods, I caught him fondling the cucumbers. What could possibly make him think that I’d prefer a vegetable to him?

Hungry But Not for Food in San Francisco

I’m with you. I much prefer the taste and feel of pure, ungarnished man-flesh. For one thing, I always thought carrots were for girls who don’t have boyfriends. Phallic fruits and vegetables are overrated anyway. They can cause an imbalance of the flora of your vagina, causing an infection. I had a friend who ended up in the emergency room with a broken-off chunk of zucchini so far up her hoo-ha, she needed to be sedated while a crack team of medical spelunkers ventured in to retrieve it. But, you’re right, there might be cause to wonder. In my mind there are three reasons a man might want to use substitute a cucumber for his manhood. One, he might genuinely think you want it. I presume you haven’t given him any reason to think so, but maybe you need to gently set him straight. Two, he might be insecure about his staying power or his size, two more things you can help him with and reassure him about. And three, maybe the most uncomfortable to bring up with him, he might be packing these garden-variety bone-daddies in his sexual picnic basket because he wants you to use them on him. I realize this notion might come as a shock to you, but it’s obviously not unheard of. So, when it comes right down to it, what is needed here is just some frank talk, probably anywhere in house other than the bedroom. Tell him you want him, you crave him, you must have him…for breakfast, lunch, and dinner. Then maybe spread a tablecloth on the rug and make sure you and he are the only courses served.

That said, have you tried ice cream? I’m particularly partial to vanilla-chocolate-caramel combinations. No nuts. Well, not the kind that come in shells anyway. Okay, gotta go. I have a booty call at Baskin-Robbins.