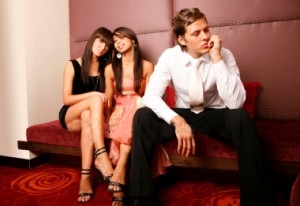 My fiancé hates my friends. I don’t know exactly what his problem is, but he is just so judgmental. He hates their politics, the movies they like, and the books they read. He just seems to be disgusted by almost everything about them. At first he was polite and at least made some effort to get along with them. But now that we’re engaged, the courtship behind us, he doesn’t even try. We went with a group of my friends to see a romantic comedy and it ended up with a shouting match in the restaurant afterwards. I ran to the ladies’ room in tears. He’s a true intellectual…he’s working on his PhD in Sociology and he just got a great job in a think tank in D.C. He gets paid a ton of money to sit in a room and think about important topics with some of the most brilliant humans on the planet. He’s a perfect guy in many ways, but just does not seem to be able to relate to the mere mortals who happen to be my dearest friends.

What the What in Bethesda

Dear What the What,

I’m not usually this frank right out of the gate, but extraordinary times call for extraordinary measures. The love or your life is an asshole. A smart asshole, and an asshole for whom you have deep feelings, but still an asshole. Something is very, very wrong here. Either you have horrible friends——unlikely, since they are your friends and I assume you’ve known them for quite some time——or this guy of yours is just the type of possessive, isolating, arrogant son of a bitch who is hell bent on making your future married life a living hell. You have to ask yourself a question. If he hates your friends so much, what does he really think of you? I think he may have some deep psychological issues that are manifesting here, but in any case, if I were you, unless he gets his act together (which in his case might require a complete personality transplant), I wouldn’t walk down with the aisle with him. In fact, I’d put on my running shoes and sprint as fast as possible in the exact opposite direction.