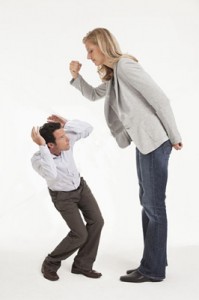 I met a guy online. He is a really good, funny writer and instant messaging with him was incredibly fun. He lives kind of far away——I live in Pasadena and he’s in West L.A. He works as a comedy writer for a major sitcom and there were many times that I would start laughing so hard I could no longer type. Then we emailed photos and it turned out that he was incredibly cute and he apparently liked how I looked too, so we decided to get together at a coffee house. I walked in and recognized him immediately. I felt a rush of relief that he was who he said he was. You know, because on the internet you never know if the guy has just downloaded a dumb photo of some cute model and is really Jabba the Hutt or worse. But here’s the thing: As I approached his table, he stood up and was only about five feet tall. He says 5’2”, but I think it’s more like 4’11”. He’s probably not technically a “little person” but, since I’m 5’ 10”, there is definitely a Danny-DeVito-Meets-The-Attack-of-the-50-Foot-Woman thing going on. I know it shouldn’t matter, but I think it does. I actually gasped out loud and I’m pretty sure he heard me. All we’ve done so far is have coffee and gone for a walk. The walk was the difficult part. I couldn’t help feeling like I was on a date with a third grader. Am I an awful person?

The Tall and Short of it

No, you’re not awful. Life isn’t fair. By all rights, this guy should have been born a mile or two taller. That was his bad luck, but it doesn’t have to be yours. It would be shallow for you to say that there is no man on Earth under five feet that you could ever consider as a mate, but it’s also absurd to assume that this particular little fellow is the one. So I can’t give you a definitive answer. There are all kinds of personal considerations here——from what it would be like to dance together to the logistics of doing you know what together. So, all I can honestly say is that if, when you fantasize about those and other situations, you don’t like him enough or aren’t intrigued enough to want see him again, you shouldn’t. If you do see him again and, after spending time together, you still feel like you’re babysitting, I don’t think you were meant to be. Don’t get me wrong, plenty of people not only make mismatches work, they really get off on it. I won’t go into graphic detail, but I’ve known women who tell wild tales of the sexual possibilities they are afforded because of being able to physically manhandle their men. I’m talking really sexy circus stuff. Only you know what you want. On the other hand, sometimes people don’t know what they want until they try it.