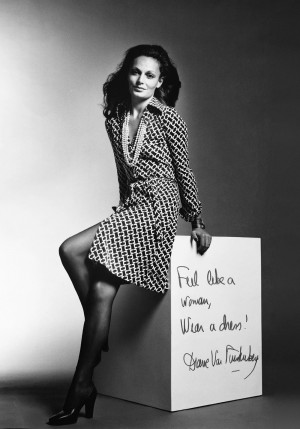 Diane was born on December 31, 1946, in Brussels, Belgium. One of the world’s most successful fashion designers, von Fürstenberg impressed the fashion world when she introduced her now-iconic “wrap dress” for the working woman in 1972.

Her mother, a Nazi concentration camp survivor, imbued her with confidence and a sense of self-worth. Von Fürstenberg attended finishing schools in Switzerland, Spain, and England, and in 1965 entered the University of Madrid. In 1966, she transferred to the University of Geneva, where she met Prince Eduard Egon von Furstenberg, heir to the Fiat automobile fortune.

By the mid 1970s, von Fürstenberg’s “wrap dress” had revolutionized American women’s apparel. It was versatile—working as both a comfortable business dress and an elegant evening gown. Furstenberg became a powerful fashion icon in the ‘70s by acknowledging the needs of a growing number of career-minded women. By 1976, she had sold 5 million wrap dresses, landed covers of Newsweek and The Wall Street Journal, and created the fragrance Tatiana, named after her daughter. 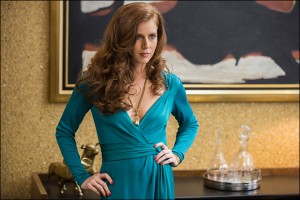 Forty years after the wrap dress made its debut, Amy Adams would resurrect its popularity by wearing the sexy dress in the Academy Award nominated film, American Hustle. An exhibit recently launched in Los Angeles at LACMA (“Journey of a Dress”) features the dress in pictures being worn by Michelle Obama, Madonna and Amy Winehouse. The images of physical beauty, the bright pink walls and the relentless rows of dresses in animal prints, geometrics, natural themes, colors and black/white, arrayed over patterned floors and walls, add up to a striking museum display that sells von Furstenberg’s ‘70s as both feminine and feminist, a libertine period that existed for a brief moment, as she put it, “between the pill and AIDs.” She insists her famous wrap dress isn’t even really about fashion — on-screen or off. “It’s about the woman,” von Furstenberg states. “And that never goes out of style.”

Fashion designer Diane von Furstenberg is a Director of The Diller – von Furstenberg Family Foundation, a private foundation that provides philanthropic support to non-profit organizations in sectors such as Education, Human Rights, Arts, Health and the Environment. Since 2010, she has presented The DVF Awards. Every year, four women who display leadership, strength, and courage in their commitment to women’s causes are each granted $50,000 to further their work.

She invests heavily in Vital Voices Global Campaign—a company that identifies, invests in and brings visibility to extraordinary women around the world by unleashing their leadership potential to transform lives and accelerate peace and prosperity in their communities.

The Billionaire has given half of her money away to The Giving Pledge—a company whose motto is “a commitment by the world’s wealthiest individuals and families to dedicate the majority of their wealth to philanthropy.”