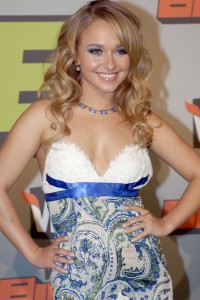 Hayden Panettiere is not only our “She-roe,” she played one on TV, too! In one of her most memorable roles, Panettiere portrayed a high school cheerleader with regenerative powers on the hit NBC show, Heroes. This wasn’t the first time we had seen her on the small screen, as she had recurring roles as Sarah Roberts on One Life to Live and the leukemia-stricken Lizzie Spaulding on Guiding Light. Panettiere also made an impression as the quick-talking, sassy daughter of a coach in the blockbuster hit, Remember the Titans, which led to other movie roles and voice acting gigs. Most recently, that voice landed her another role on a hit television show, Nashville, where she plays a rising pop-country music star!

Panettiere began her activism early in life after her role as Lizzie Spaulding on Guiding Light. Her portrayal of the young leukemia patient garnered her a Special Recognition Award from the Leukemia and Lymphoma society. Bringing awareness to this disease was not her only mission, however. Panettiere is extremely passionate about our ocean wildlife and ethical fishing practices. In 2007 she joined the Whaleman Foundation in an effort to disrupt dolphin hunting in Japan. She traveled to Japan to try to stop these fishermen, which resulted in a confrontation. Her conflict with the Japanese fishermen was documented in the Sundance-winning film, The Cove. She was later awarded the Compassion for Action Award from PETA for her efforts to stop the dolphin hunting practices. She continues to work with The Whaleman Foundation and Save the Whales Again in her mission to protect our ocean wildlife.

Visit whaleman.org to find out ways to support Hayden’s mission to save the whales and other ocean wildlife.