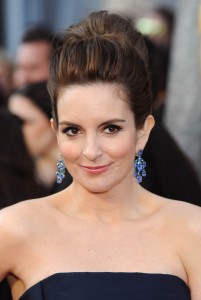 Update! Tina Fey and Amy Poehler reunite for Sisters, a new film from Pitch Perfect director Jason Moore about two disconnected sisters summoned home to clean out their childhood bedroom before their parents sell the family house. Looking to recapture their glory days, they throw one final high-school-style party for their classmates, which turns into the cathartic rager that a bunch of ground-down adults really need.

While performing at the famed Second City comedy troupe in Chicago in the late 1990s, Tina Fey submitted several scripts to the iconic television show, Saturday Night Live in the hopes of joining their team. She explained that she had her “eye on the show forever, the way other kids have their eye on Derek Jeter.” The show had been on the air for twenty years and had suffered a decline in ratings in the 1990s. Hoping to rejuvenate S.N.L., executive producer, Lorne Michaels, asked Fey to write for the show despite her reputation for being a versatile performer.  In 1999 Michaels invited Fey to become head writer of S.N.L., making her the first woman to hold that position. Fey not only made us laugh with her writing for the show, she joined the cast as a Weekend Update host opposite the wise-cracking Jimmy Fallon. After her success, Fey created a comedy television show based on her experience as the head writer on S.N.L.. The show, 30 Rock became an acclaimed hit, collecting Emmy, Golden Globe, and Screen Actor’s Guild honors. In 2013, Fey hosted the Golden Globes with fellow comedienne and longtime friend, Amy Poehler. Fey has also had success working in film, adapting the screenplay for Mean Girls, and starring in the comedies Baby Mama and Date Night. Despite her busy schedule, Fey is a devoted mother to her two children, looking out for their needs as well as these needs other children need.

Fey is involved in multiple charities focusing on the needs of disadvantaged children. She supports the group, Autism Speaks, the world’s largest autism advocacy organization. Autism Speaks is dedicated to funding autism research and advocating for the needs of individuals on the autism spectrum. In 2008, she participated in a Night of Too Many Stars, an event geared toward making people laugh and making them more knowledgeable about the effects of autism. Fey has also been in involved with the organization Love Our Children USA, which helps prevent all forms of violence and neglect against children in the United States. In 2009, Fey was honored with the Mothers Who Make a Difference Award by Love Our Children USA for her charitable ties and juggling a career and the most difficult job in the world: parenting!

If you would like to support the organizations Tina Fey holds dear to her heart visit www.autismspeaks.org or loveourchildrenusa.org.