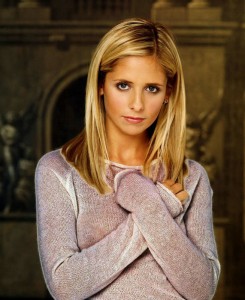 Sarah Michelle Gellar.  She is known in most households for her longtime role as Buffy Summers in Joss Whedon’s Buffy the Vampire Slayer. But before she landed her vampire slaying role, Sarah Michelle was already an accomplished actress.  At the age of 4, Gellar was discovered when out with her mother in New York.  Her work in a controversial Burger King commercial (they were later sued by McDonalds) led to appearances in TV shows like Spenser: For Hire and Crossbow, and small parts in films like Funny Farm.  Twelve years later, Gellar finally landed her big break on the popular soap opera All My Children.  The performance earned Gellar a daytime Emmy award in 1995, but shortly after, she left the show.  When one door closes, another opens and that was definitely the case in this situation. In 1997 Gellar accepted the role of Buffy in Buffy the Vampire Slayer.  The show was on for 8 years and proved hugely successful.  As Buffy, Gellar won a Saturn Award, a Teen Choice Award, and was nominated for a Golden Globe. While acting full time on the show, Gellar made room to appear in movies such as:  I Know What You Did Last Summer, Scream 2, Cruel Intentions, and Scooby-Doo in all of which she received high acclaim.  By the time Buffy ended, Sarah Michelle Gellar was a certified ‘it’ girl in Hollywood.  After marrying fellow actor Freddie Prince Jr. in 2002, she took on a variety of roles, acting in big films like The Grudge to smaller released films like Suburban Girl and lending her voice to animated TV shows and movies.  With the birth of her daughter in 2010, Gellar took a brief hiatus.  She returned to TV with the shortly lived show Ringer and now she can be found opposite Robin Williams in the CBS hit comedy The Crazy Ones.

During her long career Sarah Michelle Gellar has given back to a variety of charities through monetary donation. Some of her causes include: breast cancer research, CARE International,  Habitat for Humanity, and Project Angel Food that aids those with life threatening illnesses.

When asked about her charity work, Gellar said:

“I started because my mother taught me a long time ago that even when you have nothing, there’s ways to give back. And what you get in return for that is tenfold. But it was always hard because I couldn’t do a lot. I couldn’t do much more than just donate money when I was on the show because there wasn’t time. And now that I have the time, it’s amazing.”

In 2012 she was given the Tom Mankiewicz Leadership Award for her dedication to environmental causes.

Visit CARE International (one of Gellar’s favorite charities) at http://www.care.org/ to get involved.