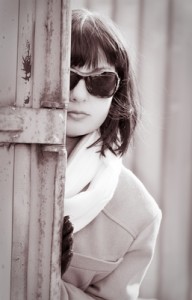 Your first book in the Second Acts Series is called Sleeping with Dogs and Other Lovers. How did you come up with that title?

All women have known men who are real dogs. The fact is a lot of women prefer the bad ones. The irony is a lot of the good ones are super bad. This series brings together many of my passions: dogs (actual dogs), good-bad boys, and romance. Oh, and sex.

Tell us about the message in your novel?

Although women can’t necessarily have it all, they can definitely have a lot. I’m in favor of figuring out what turns you on — in boardrooms or bedrooms, between spreadsheets and silk sheets, with friends, colleagues, and lovers — and pursuing those things with the passion they deserve.

How much of the book is realistic?

Almost nothing in the book is literally autobiographical, but that said, there are clear parallels throughout. Without going into graphic detail, I had one romantic stay in a ridiculously fancy hotel suite that was similar to Cynthia and Max’s in that it lasted much longer than we’d originally planned. Very hot and heavy. I almost had to be taken out on a stretcher.

If you had to do it all over again, would you change anything in your book?

I try not to dwell on regrets. You can work on a book almost forever if you choose to. It’s more of a process for me. I’d rather start a new book than think about the woulda-coulda-shouldas of something I’ve already finished.

What was the hardest part of writing your book?

Aside from some decidedly steamy passages in my diaries, the bulk of my writing has been scholarly . . . literary. So, that’s a big change of pace, obviously. I’ve been a professor for a long time and I’m quite widely published . . . but nothing that would pop up on Amazon, and definitely nothing involving sexually explicit romance and irreverent humor. But, as I say, I’ve been journaling faithfully since pre-pubescence, so if anyone is looking for a seriously juicy memoir, I’ve got an entire closet of hardcover journals just aching to be outed.

Did you learn anything from writing your book and what was it?

Do you recall how your interest in writing originated?

I’ve been writing every day since I first scribbled my name…so, before kindergarten certainly. I can’t say that I’ve always wanted to write books for a living, but my world has always been wrapped up in writing and books.

Who is your favorite author and what is it that really strikes you about their work?

It’s hard to choose one, but if I had to, I’d probably go with Faulkner. I just adore him as a stylist. There is more tragedy in one of his sentences than entire bookshelves of other writers. But he’s not terribly relevant to these novels I’m writing now. In terms of romance, I love a lot of what some might call lowbrow or trashy or whatever . . . Cartwright, Steele, etc. But nothing can compete with D.H. Lawrence, just in terms of eroticism and style. Nobody else does that. When I was fifteen and first read “Your breasts, your knees and feet! I feel that we / Are a bonfire of oneness, me flame flung leaping round you / You the core of the fire, crept into me,”  I couldn’t get it out of my head for months. That’s not true . . . years. Also: “Be a good animal, true to your animal self.” Now that’s a sentiment I can relate to. As could Cynthia and her clients.

What are you working on now?.

Well, the second book in the series, STARSTRUCK ROMANCE AND OTHER HOLLYWOOD TAILS is out — and I’m now working on the third. In STARSTRUCK ROMANCE, as Second Acts Dating Service grows in size and popularity, we delve deeper into Cynthia’s life and loves, as well as the lives of her friends and clients. It’s a romantic rollercoaster. And the culture in and around Hollywood — actors, directors, and so on — figures prominently. I lived in Los Angeles for a few years and knew quite a few people in the industry, so I’m drawing on that experience.

I’ve also started a new blog on TruLoveStories.com in the voice of Cynthia, the main character. She insisted on doing the blog and I found myself unable to refuse her. It’s sort of a love/dating tips column, but laced with an attitude and humor that’s all hers. I’m calling it “Love, Lies & Dating.”