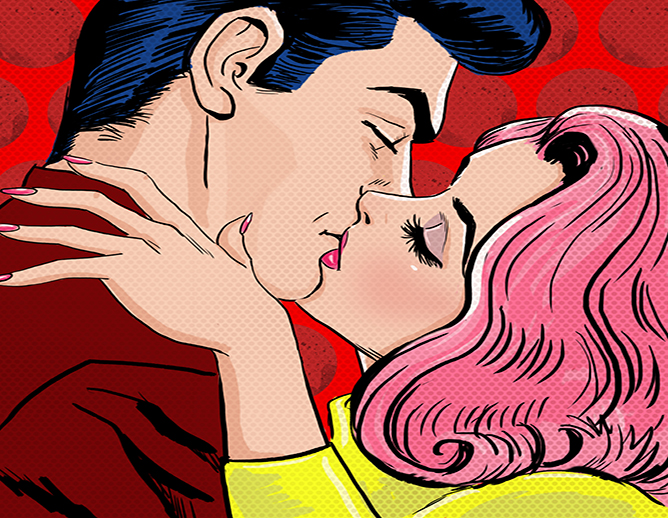 We love to feature celebrity romance on this site. From Warren Beaty and Annette Bening to Kristen Bell and Dax Shepard, we have covered a broad spectrum of celebrity couples of different ages. Not all Hollywood couples end in a fairy tale story, as some relationships simply burn out. That doesn’t stop the world’s most beautiful and talented people from saddling up and trying another merry-go-round ride of love. Despite their age and youthful glow, many of Hollywood’s best are putting themselves out there in the world and trying again. Here are some of our favorite over-40 couples that have given love another chance. 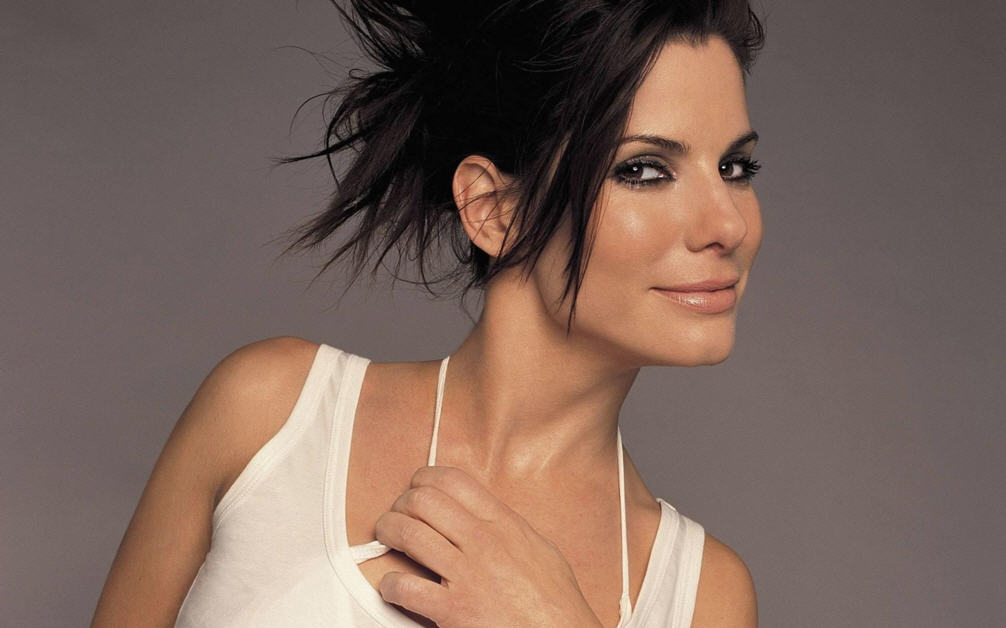 Sandra Bullock is one of America’s Sweethearts. She is an Academy Award winning actress who happens to be one of the highest paid individuals in her field. She recently adopted a fearless 3 year old named Laila who has brought nothing but joy to her home. Laila was a little girl from Louisiana who had been in foster care. Her 5-year-old son Louis, whom she adopted in 2010, began bugging Sandra to adopt a new member to their family.

Bullocks’ dating life has been rocky to say the least. She was previously engaged to actor Tate Donovan, and romantically involved with NFL legend Troy Aikman and actors Matthew McConaughey and Ryan Gosling. She married mechanic and reality TV star Jesse James in 2005, but that marriage ended in 2010 amid rumors of James’ infidelity. 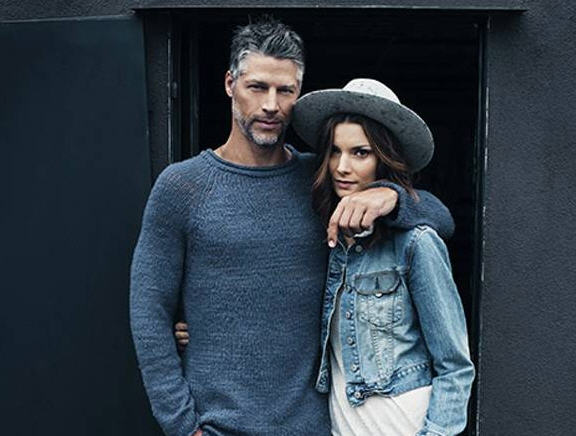 She has now been linked romantically to photographer Bryan Randall. Randall has a young daughter, so Bullock’s children might have a new pal with whom to hang out. Asked if she can ever see herself getting married again, Bullock responded, “I don’t think so, but I can see myself in a committed, safe relationship where there is lots of love and laughter, and ‘making memories’ is No.1 on the to-do list. My priorities are my children. A man who is brave enough to step into this world of ours has to be someone quite extraordinary.” 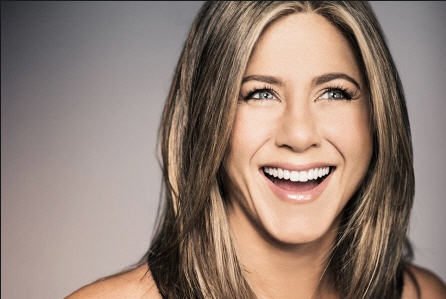 Jennifer Aniston gained worldwide recognition for portraying Rachel Green on the popular television sitcom Friends for 10 years, a role which earned her a Primetime Emmy Award, a Golden Globe Award, and a Screen Actors Guild Award. The character was widely popular during the airing of the series and became recognized as one of the 100 greatest female characters in United States television.

In real life, Jennifer Aniston was even more popular. Her marriage to actor Brad Pitt was like a giant summer blockbuster—full of action, adventure, but ultimately never quite as good as it should be. The couple began having marital difficulties soon after Pitt starred in in Mr. and Mrs. Smith with Angelina Jolie.  Brad had allegedly been seeing his co-star, Angelina on the side and things were starting to heat up. Brad and Jenn split up, and shortly afterwards, Pitt began dating Jolie. Jenn was left the “victim” and America supported her.

Since her divorce in 2005, Jenn has had her share of frogs charading as her would-be prince — Vince Vaughn, Adam Duritz and John Mayer have all had a go at being her beau, but none seemed to last. 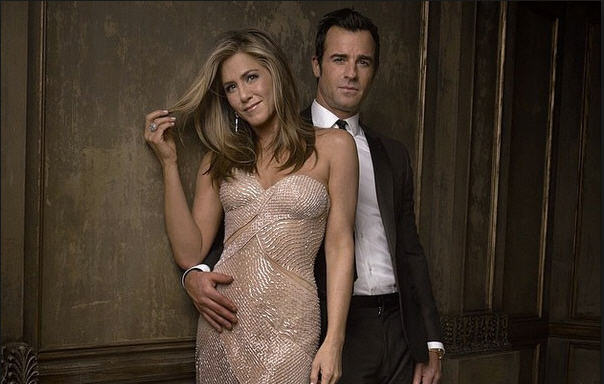 Enter Justin Theroux.  Lead actor of the HBO show, The Leftovers, and all around heartthrob, has asked for Jenn’s hand in marriage, which she excitedly said “yes” to. The two were married in a private ceremony with close “Friends” (see what we did there?) in attendance in early August of this year, and will be living out the Hollywood fantasy life in their $21 Million dollar Bel-Air Mansion. Life is good and worth the wait! 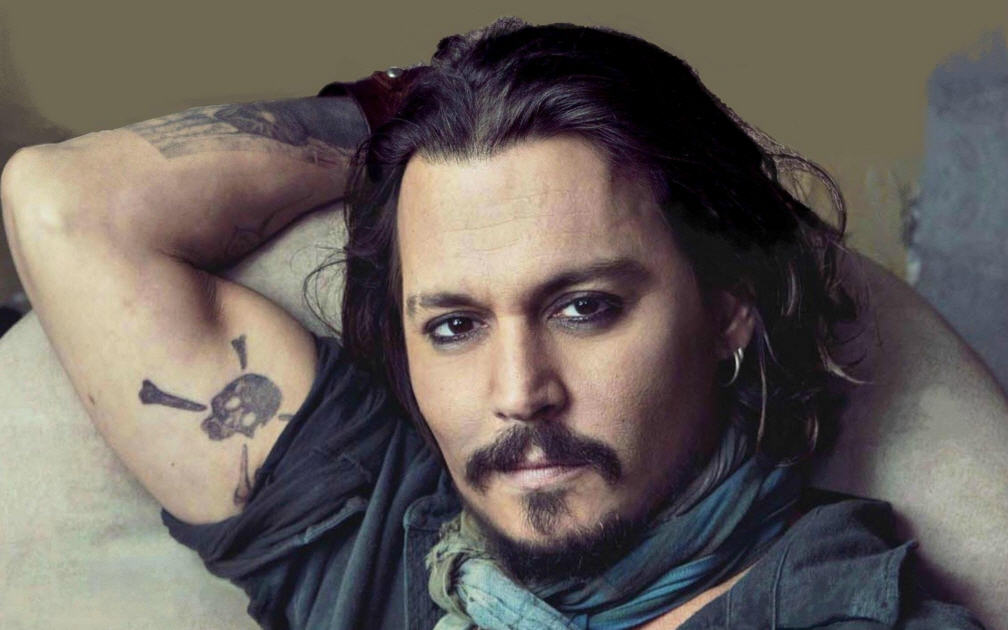 Johnny Depp is regarded as one of the world’s biggest film stars.  He has gained worldwide critical acclaim for his portrayals of such people as screenwriter-director Ed Wood in Ed Wood, undercover FBI agent Joseph D. Pistone in Donnie Brasco, “gonzo” journalist Hunter S. Thompson in Fear and Loathing in Las Vegas, and the Depression Era outlaw John Dillinger in Public Enemies. Films featuring Depp have grossed over $3.1 billion at the United States box office and over $7.6 billion worldwide.

Depp has been nominated for major acting awards, including three nominations for Academy Award for Best Actor. Depp won the Golden Globe Award for Best Actor – Motion Picture Musical or Comedy for Sweeney Todd: The Demon Barber of Fleet Street.  He has been listed in the 2012 Guinness World Records as the highest paid actor, with earnings of $75 million.

His dating life has been just as rich. Depp was married to Lori Anne Allison from December 20, 1983 until their divorce in 1985. He was later successively engaged to actresses Jennifer Grey and Sherilyn Fenn in the late 1980s before proposing in 1990 to his Edward Scissorhands co-star Winona Ryder, for whom he tattooed “WINONA FOREVER” on his right arm. 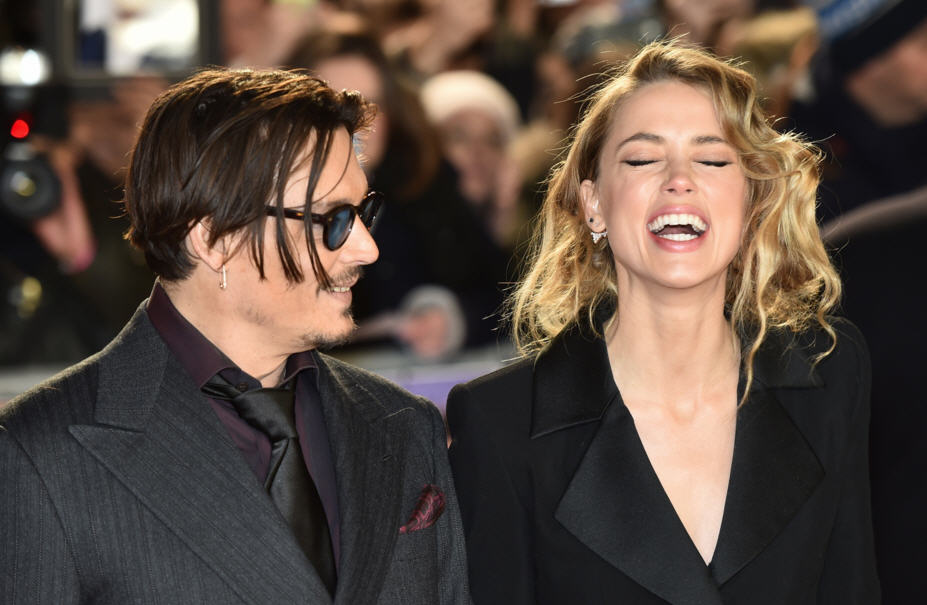 None of these ladies had what it took to tame the talented thespian and fulfill his longing for love. That is until he met actress and model Amber Heard in 2012 on the set of The Rum Diary. The two married on February 3, 2015, in a private civil ceremony at their home in Los Angeles.

“She’s sharp as a tack,” Depp said. “Heard is a wonderful girl. A Southern belle and sweet as can be, and very good for me.” 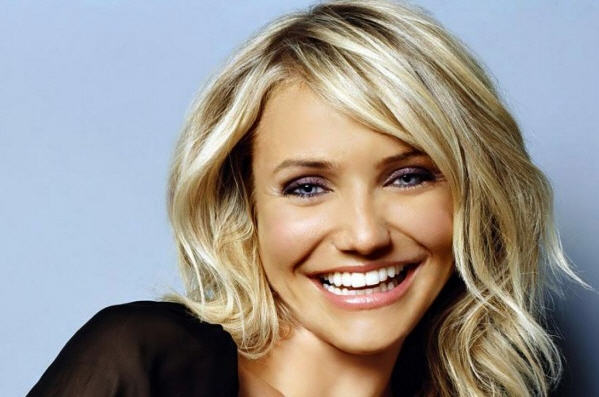 Diaz has received four Golden Globe Award nominations for her performances in Being John Malkovich (1999), Vanilla Sky (2001), Gangs of New York (2002) and There’s Something About Mary (1998). In 2013, Diaz was named the highest-paid actress over 40 in Hollywood. As of 2015, the U.S. domestic box office grosses of Diaz’s films total over $3 billion, with worldwide grosses surpassing $7 billion, making her the highest-grossing U.S. domestic box office actress.

Although Diaz had never been married until recently, she has definitely had her share of high profile suitors. Diaz’ five-year relationship with video producer Carlos de La Torre ended in 1995. Actors Matt Dillon, Jared Leto and Justin Timberlake have all been by her side at one point, as was New York Yankee Alex Rodriguez. The actress has stated that she suffers from ADHD and perhaps the extra care and attention she needs was just too much for most of the men she dated. 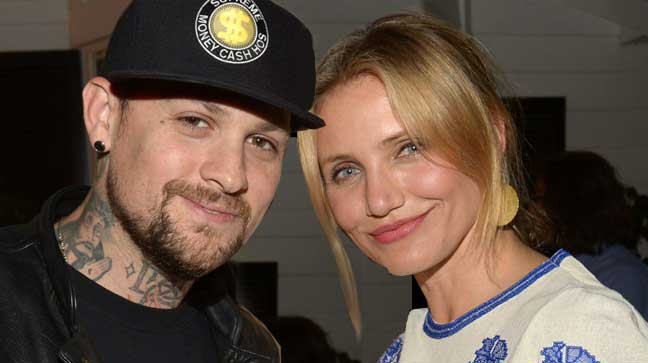 Diaz began dating Good Charlotte’s Benji Madden in May 2014 and was engaged to the rocker that December 22. In a whirlwind move, the pair tied the knot on January 5, 2015 at Diaz’ Beverly Hills home. Yes, for those of you counting at home, that is a 17 day engagement. Drew Barrymore and Nicole Richie were two of her bridesmaids, along with her sister Chimene Cain and assistant Jesse Lutz. The marriage came as a reversal for Diaz, who had previously referred to the custom as a “dying institution” that doesn’t “suit our world any longer”.

Here’s to hoping she stays happy, in love and completely focused on her new life together with Madden. 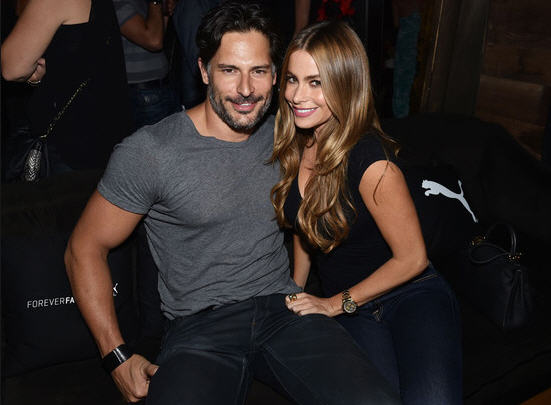 Sofia and Joe might be the hottest newlyweds in show business. The two married in Palm Beach, Florida on November 21, 2015 after an 11 month engagement.

Vergara was married at the age of 18 to her high-school sweetheart, Joe Gonzalez.She gave birth to their son Manolo in September 1992 and the two were divorced by 1993.

On July 10, 2012, it was reported that Vergara and her boyfriend Nick Loeb were engaged, but by the following year, Vergara announced that the engagement had been called off.

Manganiello met actress Audra Marie during the 2009 Super Bowl and it was reported the pair had become engaged — but rumors of their break-up surfaced during the summer of 2011. He followed up this relationship by jumping into ones with actresses Rose McGowen and Bridget Peters. While the flings were fun, he was fascinated with Sofia Vergara—and she with him. 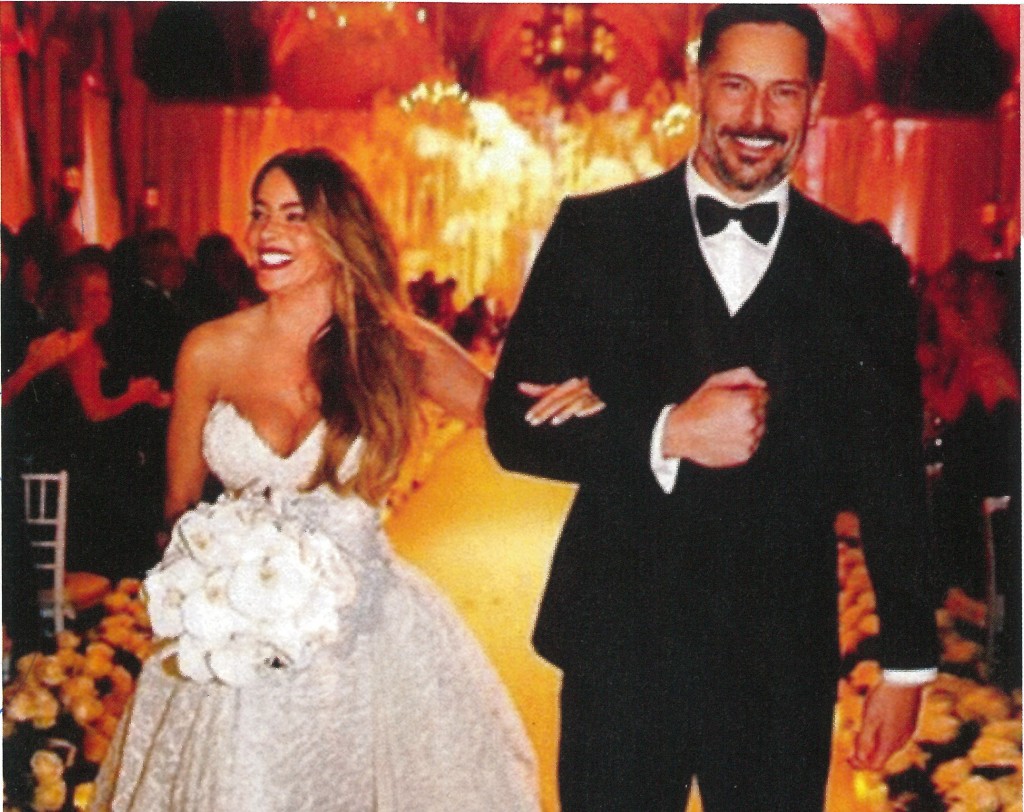 The sexy werewolf and voluptuous aunt are as happy as can be and prove once in for all that love can come at any time and you better be ready to receive it.

40 is the new 20 when it comes to falling in love. Only this time around, these celebrities have experience to fall back on.