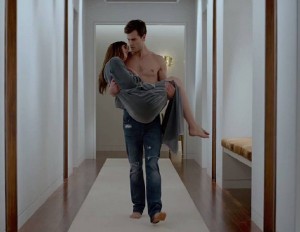 The trailer for the Fifty Shades of Grey film has finally been revealed, giving fans a first look at Christian Grey and Anastasia Steele on screen.

The film, which has been directed by Sam Taylor-Johnson, sees Christian Grey played by a youthful Jamie Dornan with Dakota Johnson in the role of college student Anastasia Steele.

The anticipated movie has been co-produced by Fifty Shades of Grey writer EL James, and has been timed for a Valentine’s Day release in 2015.

Yes, there’s fleeting glimpses of some of the racier material from EL James’ best-seller – although those expecting a sizzling page-for-page re-enactment may well be disappointed, following reports the sex scenes have been toned down for the screen.

A source previously admitted: ‘It’s less racy than the book,’ while those who viewed early footage of the film back in March declared it ‘surprisingly tame’, with suggestions that the focus was more on romance than raunch.

*UPDATE In the week since Universal and Focus Features premiered the trailer for Fifty Shades of Grey, the 2 1/2-minute promo has become the biggest online trailer launch in history, the studio said. Universal scored more than 100 million views across all platforms in a week. That is about the number of books sold globally.